I’ve got good news to share with you regarding our battle to strip out red flag gun confiscation orders out of VAWA, or the Violence Against Women Reauthorization Act of 2021 (H.R. 1620).

But before we get into today’s news on VAWA, let’s make sure you’re up to speed.

Last week, Gun Owners of America alerted you to gun control that’s in VAWA, after a Senate hearing tipped the anti-gunner’s hand.

Senator Durbin said he was looking forward to rushing a bill to the President’s desk with the help of Republican Senator Joni Ernst—who is leading current VAWA negotiations—and anti-gun zealot Senator Dianne Feinstein.

Why do you think President Biden and Senators Durbin and Feinstein are so excited about the bill?

Well, the six sections containing gun control might give people, including Senator Ernst, a good clue!

In this year’s VAWA:

Please, take action and make as much noise about H.R. 1620 and the six gun control sections within. The louder we are, the more Congress will listen!

But I haven’t gotten to the good news yet.

After GOA’s action alert went out to the grassroots, you took it and ran with it.

A few media outlets picked up the story, and gun owners started raising awareness about this VAWA negotiations which include “red flag” gun confiscation.

“[I]t seems like Republicans are ready to cave in pass the bill with the gun control measures intact.”

On most other issues, Senators have learned they can get by with backroom negotiations and trading votes.

But one cannot compromise or negotiate with our Second Amendment rights!

They know this, so between the Ammoland article and your support, at least one Senator has begun to listen!

This isn’t the end of the fight, so it’s important that you take action right away to demand your Senators go on record against the gun control in H.R. 1620. This is how we beat President Biden’s gun control agenda! 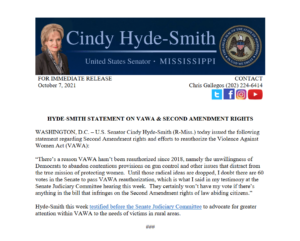 Following your outcry, Senator Cindy Hyde-Smith decided to clarify her support for the Violence Against Women Reauthorization Act of 2021 which she expressed at the hearing.

In a public statement made to Ammoland News, Senator Hyde-Smith of Mississippi promised gun owners:

“They certainly won’t have my vote if there’s anything in the bill that infringes on the Second Amendment rights of law-abiding citizens.”

That is what gun owners like to hear from their Senators!

Keep up the pressure on your Senators so that we can get them on the record against the gun control in H.R. 1620!

What Senator Hyde-Smith is saying is definitely the best news gun owners have gotten so far, if they’re watching the VAWA negotiations carefully.

Last we heard publicly was at the hearing, where Senator Dick Durbin said:

I look forward to introducing the Violence Against Women Reauthorization Act [Senate Compromise Bill] with Senators Ernst, and Feinstein, [and] many of our colleagues, quickly. We want to move on this. We need to get this bill to a president who is ANXIOUS to receive it as well and sign it into authorization.

Introducing and passing a bill “quickly?”

That’s not what Gun Owners of America has in mind—that’s for sure!

Its so important that you speak up and tell your Senators to oppose this gun control as loudly as you can—lest a quick deal be cut and a gun control bill slips through the Senate without a fight!

If you recall, just prior to the hearing, gun owners received other concerning news from the Republican Senator in charge of the VAWA negotiations: Senator Joni Ernst of Iowa.

In September, Huddle — Politico’s “play-by-play preview of the day’s congressional news” — reported on the negotiations, saying:

Ernst told Huddle that she sees a path forward for VAWA, including on firearms provisions which have held up negotiations for years. “I think we’ve found a potential solution on that,” she told Huddle, without additional details. “We’re just running the traps,” she said.

Negotiating a “path forward for VAWA” on “firearms provisions” can ONLY serve the Biden gun control agenda.

What are Republicans doing?

I think we all deserve a little more clarification and honesty from Senators who were elected to support the Second Amendment.

That’s why its so refreshing to hear Senator Cindy Hyde-Smith come out against the gun control in VAWA. And that’s why you need to take action and make your voice heard in the Senate!

Senator Ernst owes it to gun owners in Iowa AND to the gun owners of the nation—who she represents in these negotiations—to condemn all six sections of gun control in H.R. 1620.

Gun owners deserve to know what it means that Senators Durbin and Feinstein are “looking forward” to introducing a VAWA bill with you “quickly.”

Will that bill include gun control?

It had better not.

Reach out to your Senators with haste and demand they come out in opposition to any VAWA reauthorization that includes gun control.

Stay tuned with GOA action alerts on VAWA, as politicians on both sides of the aisle abuse Domestic Violence Awareness month to pass gun control in the U.S. Senate.

Take your concerns and demand answers on your Senators’ social media pages.

See if your Senators are hosting town halls near you—then get out there and demand answers!

This is how we win.

NC: She is spookier than a ghoul or ghost…