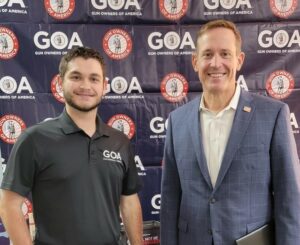 Gun owners in the Tar Heel State deserve a Second Amendment Champion in the US Senate.

Congressman Ted Budd has proven himself to be that champion.

He’s cosponsored legislation to remove short barreled rifles and shotguns, as well as suppressors, from the National Firearms Act. He’s also supported concealed carry reciprocity and an almost endless list of pro-gun bills in his short time in Congress.

And most recently, he voted against military red flag gun confiscation, a measure that over 130 turncoat Republicans voted for.

Time after time, he’s proven himself to be a standout for the Second Amendment. Gun owners need Ted Budd to represent them in North Carolina.

In fact, North Carolina is a “must win” state in taking back the Senate from the anti-gun likes of Sen. Chuck Schumer and Vice President Kamala Harris. And Ted Budd is the man for the job.

He’s earned the support of Gun Owners of America and President Trump. He’s the gun owners’ choice for the Old North State.