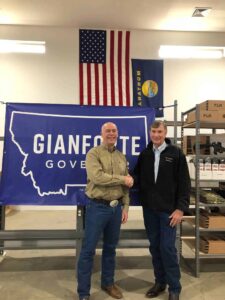 Now that an anti-gun Democrat is no longer sitting in the governor’s chair, the Montana legislature is advancing a proposal which would turn Montana into a full Constitutional Carry state.

Under House Bill 102, a Montanan will be able to carry, concealed or openly, anyplace in the state except (1) a jail, prison, or treatment family; (2) the secure area of an airport, (3) a federal building or military reservation, or (4) private property when expressly forbidden.

Previously, Montana had generally recognized your right to protect yourself and your family without getting the government’s permission, but the law hard carved out several “No Freedom” Zones.

This bill, however, would recognize the right to carry on campus, conditioned on safety training.

Finally, the bill allows aggrieved firearms owners to sue to rectify a violation of his or her rights, and it strengthens preemption of anti-gun local government action.

It’s well past time that Montana joined 16 of the safest states in the country, and repealed the unreasonable and unconstitutional exceptions to Montanans’ exercise of their Second Amendment rights.

The bill has passed the House by an overwhelming vote and now goes to the Senate Judiciary Committee.

So please urge your state senator to support this important bill using the form above. Let’s get HB 102 to Governor Greg Gianforte right away!

FL Gun Grabbers Believe That Criminals Will Follow the Law