A new line of attack on Virginia’s fast-growing gun sanctuary movement, which is propelling similar pro-gun efforts in other states, compares it to slavery, drawing criticism from movement leaders who have won support in 91% of the state’s counties. 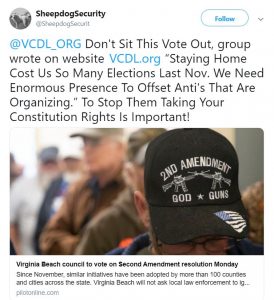 In the latest Washington Post slam on the movement, dubbed “vigilantism” in a recent editorial, the paper gave space Sunday to a critic who said the “thinking” behind the organic movement is what propelled slavery and opposed the civil rights movement.

In linking it to slavery, he wrote, “A sad irony is that the ‘sanctuary’ movement conjures the disturbing nullification movements of the past three centuries in Virginia. Thomas Jefferson and James Madison argued that the states have the right to ignore federal laws they consider unconstitutional. That thinking was applied to proslavery movements, leading to the Civil War and the fight over integration in the 1950s and 1960s.”

He also cited polls showing broad public support for gun control, which the new Democratic state legislature and Gov. Ralph Northam plan to use in arguing for a ban on modern sporting weapons such as the AR-15, limits on the size of magazines that hold cartridges, an expanded background check system, and a new $4 million, 18-member team to enforce new gun control measures and a limit on gun purchases…

The media’s push for gun control, however, was met with pushback today from Gun Owners of America Senior Vice President Erich Pratt, a leader in the sanctuary movement in which some 116 Virginia communities and counties have voted to ignore gun control laws emerging from Richmond.

He said that the Post and Galuszka are misreading the polls and the public’s desire for gun control as it has turned blue.

“There’s a lot The Washington Post got wrong in this story. The author is wildly wrong about the supposed public support for gun control. Consider that a majority of Maine residents voted for Hillary Clinton in 2016, even while defeating a ballot initiative that would establish ‘red flag’ gun confiscation orders. So if these red flag gun grabs are opposed by a majority of voters even in certain blue states, how can anyone really claim with a straight face that a majority of Americans support such a law?” he told Secrets.

He also said that any comparison to slavery is simply an effort to demonizing gun owners.

“In an attempt to demonize ‘nullification,’” he told us, the column “completely ignores how anti-slavery forces helped to undermine the Fugitive Slave Act — such as when juries refused to convict defendants who assisted runaway slaves.”

And, he added, “Sanctuary resolutions are important because they provide the best way for local officials to inform the newly elected General Assembly and the governor that if they rush forward to create new felony crimes to jail law-abiding Virginians — just for exercising their most fundamental and natural right of self-defense — then they cannot expect localities to enforce such unjust laws. What these sanctuary jurisdictions are doing is not resistance, but noncooperation — a principle that runs through all levels of government dating from colonial America.”