Virginia Gov. Ralph Northam said Tuesday that his gun control agenda does not include door-to-door confiscation of firearms, deployment of the national guard to enforce gun control legislation, or cutting off electricity of Virginians for the purpose of gun confiscation. 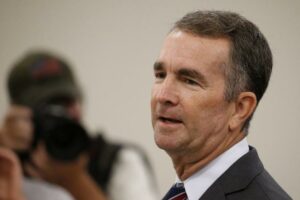 The governor said he wanted to dispel rumors and called for civility in gun control discussions while laying out his agenda in a joint news conference with the leaders of the new Democratic majority in the House of Delegates and the Senate. He said his gun control policies are only meant to keep guns out of the hands of dangerous people…

Gun-rights activists, including Gun Owners of America, expressed concern that the forced gun registration may be a stepping stone for gun confiscation because it would provide the state with a comprehensive list of who owns these firearms.

“The governor himself on November 6, when asked if he would confiscate guns, said ‘That’s something I’m working [on] with our secretary of public safety,'” Erich Pratt, the senior vice president of Gun Owners of America told The Center Square in an email.

“And while he has retreated somewhat from that position in recent weeks, he has said that he supports imposing a gun ban with a grandfather clause and registration for existing owners,” Pratt said. “Of course, registration is the necessary first step for gun confiscation, as we have already seen in California and New York. So Virginians will oppose his efforts to register guns – just as strenuously as if he were outright banning them.”

Pratt said that the U.S. Constitution and the Virginia State Constitution both state that the right to keep and bear arms shall not be infringed. He said that all of Northam’s proposals violate the constitutions by infringing on these rights…

Read more at The Neighbor