“We’re here tonight to start the ball rolling on a movement that we hope others in this county will take notice of,” said Township Chairman Joseph Wise. The ordinance would prevent the enforcement of certain gun control measures that violate the Second Amendment…. 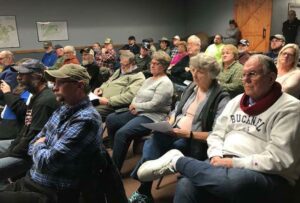 Rick Dandes/The Daily Item More than 40 people attended a Buffalo Township meeting Monday night to hear a discussion about a second amendment sanctuary ordinance that supervisors will Vote on in a future meeting.

“What these ordinances do is protect gun owners’ rights from future attempts to restrict ownership,” Waltman said, “although the Second Amendment is supposed to. The ordinance would say, in effect, that the governing body would not use any of their resources, personnel, to enforce those unconstitutional laws.

“That’s what we’re trying to do in Union County,” he continued. “Protect our rights.”

The ordinance does not address previously passed gun laws.

No one in the audience disagreed with the concept of such an ordinance being enacted.

But Christian Soltysiak, executive director, CeasefirePa, said on Monday from Philadelphia that “such an ordinance would be putting residents at risk of gun violence.”  She declined further comment until she knew more about the proposed ordinance.

Read more at The Daily Item