Fifty-five years ago today, Dr. Martin Luther King, Jr., delivered his famous “I Have a Dream” speech in front of the Lincoln Memorial in our nation’s capital.

While Dr. King’s speech is well-known, what is not so widely recognized are his views on firearms.

People who visited Dr. King’s home described it as an arsenal. One journalist came to his house and later reported that while sitting down in an armchair, he almost landed right on a handgun. 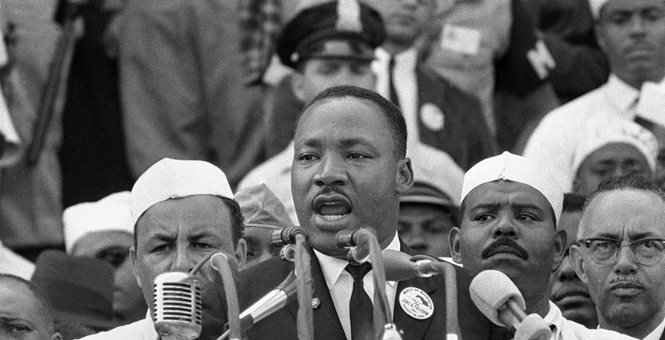 Not only that, after Dr. King’s home was bombed, he applied for a concealed carry permit in Alabama in 1956. But he was denied.

All of this just underscores the dangers of gun control. It turns our rights into privileges, allowing prejudiced officials to revoke the rights of decent people at will.

We see this in the Black Codes which either prevented or discouraged the ability of African-Americans to protect themselves with firearms.

This, of course, made them easy prey for the lynch mobs.

One African-American journalist, Ida Wells, documented many of the lynchings that took place in the 19th Century.

But she also noted that the only time blacks actually escaped the lynch mobs was when they “had a gun and used it in self-defense.”

This is why the Second Amendment is so important. It not only safeguards our right to defend ourselves against thugs, it protects that right when the thugs are wearing badges.

The best-known example of this in American history is the colonists’ spirited defense against the British attempt to confiscate weapons and powder at Concord, Massachusetts, on April 19, 1775.

But this was not the last time that armed civilians would use their weapons to protect themselves against corrupt officials.

In 1906, a white mob worked itself up into a frenzy and started a race riot in Georgia. Over a thousand men walked through the streets of Atlanta, indiscriminately beating black men and women, black teenagers, and black businessmen.

The scene was gruesome. The best estimates record that dozens of blacks were murdered. Hundreds were wounded.

The rioters spilled from one area of Atlanta into another, until they reached one neighborhood, known as “Darktown,” where African-Americans were armed and shot back. That’s where the riot was stopped in its tracks.

Armed blacks forced the mob to retreat and they prevented a second bloodbath.

All this happened on a Saturday night. The riots were paused because of the armed response, but then they resumed again on Monday.

Only this time, to make matters worse, state law enforcement officers went into south Atlanta and tried to disarm the blacks.

One of the preeminent historians who has covered the 1906 riots, John Dittmer, had this to say about what happened next:

[The lead officer] James Heard, was shot out of his saddle and died instantly. Three other officers … were wounded in the initial exchange before the outgunned troops fled, leaving Heard’s body behind. (John Dittmer, Black Georgia in the Progressive Era (1900-1920), p. 128).

Once again, the riot was abruptly stopped.

In his 1963 speech, Dr. King spoke of the Declaration of Independence as the great promissory note which guaranteed the unalienable rights of ALL people.

This right of self-protection is the freedom which protects all our other rights against official abuse. We’ve seen this in practice time and again.

Former Secretary of State to George Bush, Condoleezza Rice, tells the story of how her dad would take his shotgun — and with other armed African Americans in the neighborhood — would form nightly patrols to protect the town’s people from the KKK.

This was common during the difficult days of the civil rights movement. African Americans would use their firearms to protect themselves against the KKK when the Southern Democrat police departments were looking the other way.

So therein lies the rub — government agents don’t always act in the best interests of its citizens.

And that’s why there is a Second Amendment — a guarantee which protects the right of the people to keep and bear arms without infringement.