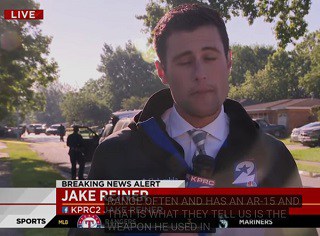 On May 6th, 2017, an armed man was sitting on his front porch in the 400 block of Glenburnie Drive in Houston, Texas. He had a concealed carry permit. His brother says that he goes to the range often. He was on his porch and had another firearm with him. An AR-15 type rifle.

Three men attacked him in a drive-by shooting at about 2:15 a.m. He fired back, hitting all three. They car they were in crashed, and all three left the vehicle to continue the attack.

The homeowner kept up his defense, shooting back and hitting all three men again. Two died, one at the scene, one at the hospital. One of them was in critical condition.

Over 40 shots were fired, but the home defender was not hit. Not once.

Those who wish a disarmed population tell us that AR-15 rifles and other modern sporting rifles are not useful for self-defense. From bustle.com: