National Director of Hunter Programs for the Gun Owners of America says the solution to gun violence isn’t fewer guns, it’s more of them

Wyoming has the second-highest rate of gun ownership in the nation, with over two-thirds of Wyoming adults living in a household with a firearm, according to a 2020 study by the RAND Corporation. 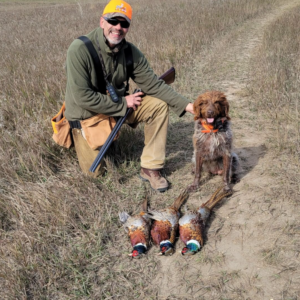 Avid hunter and gun rights activist Mark Jones serves as Wyoming legislative director for the Gun Owners of America. He often takes his 10-year-old dog, Faith, with him on hunting trips.

As mass shootings continue to dominate the headlines and support for gun regulations increases in some parts of the country, the Wyoming Truth spoke with Mark Jones, national director of hunter programs and Wyoming legislative director for the Gun Owners of America, about his Second Amendment advocacy in the Equality State and across the nation.

Our conversation touched on new federal gun regulations, Wyoming gun deaths and what gun control advocates misunderstand about gun owners. What follows are experts from the interview.

In June, President Biden signed into law a bipartisan bill imposing new gun restrictions, the most significant federal gun control measure in decades. What was your reaction to the legislation?

Jones: We didn’t like the final version that passed; we opposed it. It contains money for states to implement red flag laws, which we view as unconstitutional. And it also redefines the requirements for selling firearms, which could make criminals out of law-abiding people. So we don’t feel like it was a good piece of legislation, and we fought it until the bitter end.

Beyond increasing funding for red flag laws, the legislation expanded background checks for gun buyers under 21, increased funding for mental health and drug treatment, and closed the so-called ‘boyfriend loophole’ so ex-partners accused of domestic violence can no longer purchase firearms. Does your group oppose any of those measures?

Jones: The boyfriend loophole can be abused, depending on how they write the regulations. Theoretically, anyone you ever went on a date with could decide to accuse you. Or say you had one date four years ago, that person could accuse you of being a threat and you can be deprived of your constitutional rights without due process. . . .

I’m not a mental health expert. I definitely think we need to address mental health issues in this country. I think when there were laws changed in the 1980s that made it harder to commit legal people and things like that, those things need to be looked at.

The background checks, those are also something we oppose.