Why Americans won’t Support or Vote for Background Checks 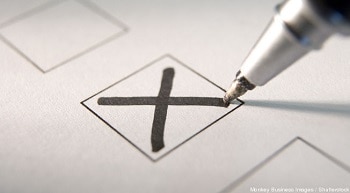 Americans were recently treated to skewed polling data claiming that 92% of all Americans support universal background checks — a result which, if true, would mean that an overwhelming majority support the framework for a national gun registry.
But don’t believe it.These polls can’t be trusted for many reasons.
The same polls also purport to show that 74% of members of gun organizations support screening gun purchases — and one poll commissioned by Bloomberg even found (supposedly) that 82% of NRA members support the background check and registries.
So both NRA and GOA did polls of their own members.
* NRA did a scientific survey of about 1,000 members and found that 5% of its members support the universal registry legislation.
* And GOA did a non-scientific poll of its members. After nearly 25,000 gun owners responded, GOA’s survey found that only 4% of its members supported “universal background checks.”
These poll results are significant as they show that the “mainstream” polls are about 70-80 percentage points off when they survey members of gun organizations.[1]
Which should make one wonder: if these polls can’t be trusted when they’re polling our members, then what makes you think they can be trusted when they’re polling the entire nation?
Additionally, a recent Quinnipiac poll found that, by a margin of 48-38%, Americans think background checks will lead to confiscation.  And a CBS News poll found that only 47 percent of Americans want stricter gun control.  So if that’s true, how is it that twice that number supposedly want background checks expanded?  The numbers just don’t add up.
But there’s more.  Even if the “mainstream” polls weren’t fudging the numbers when it comes to questions regarding background checks and gun registries, their polls still don’t measure the “intensity gap.”
That’s the missing question that most pollsters don’t ask:  What is it that ultimately motivates voters to vote the way they do?  One doesn’t have to be an expert in “reading the tea leaves” to discern that the intensity is on the side of gun rights:
* A January 14 Gallup poll shows that only 4% of Americans thought gun control was a major priority.
* A recent Quinnipiac poll showed that President Obama’s poll numbers have fallen dramatically since December (a 12-point swing) — and this corresponds with the time that he began his assault upon the Second Amendment. (Feb. 8, 2013)
* Likewise, an earlier Quinnipiac poll showed that Governor Andrew Cuomo’s support had fallen 15 points after signing the gun ban in New York. (Jan. 30, 2013)
* Finally, a Zogby/O’Leary poll indicated that by a 2-1 margin (52%-26%) voters would be more likely to oppose Senators who were not supportive of issues that are important to gun owners. (July, 2009)
These polls measuring the “intensity gap” should send chills down the spines of those who are considering Second Amendment “infringements.”
Gun owners are interested in things like concealed carry reciprocity, which would allow them to carry across state lines.  They are interested in preserving their God-given rights which are protected by the Second Amendment.
But they are NOT interested in Universal Background Checks which ban the private sales of firearms (without government approval) and establish the framework for a national gun registry!
Gun Owners of America encourages all Senators to vote NO on the motion to proceed to S. 649 — and to support the Paul-Cruz-Lee filibuster.

Erich Pratt is the Director of Communications for Gun Owners of America.

1. GOA can provide a more detailed analysis, upon request, of the problems with the various polls which purport to show that Americans support expanded background checks. For starters, most lawful gun owners already go through background checks when they purchase guns from dealers. Considering the recent CBS poll (3/23/13) showing that only 47% of people want stricter gun control, it shows that respondents to other polls — supposedly showing that 92% want background checks — believe they are being asked whether they support the status quo (regarding dealers).