Why would anyone trust Feinstein and Schumer to support their gun rights?

Can Anything Good Come out “Feinstein-n-Schumer-land”?

Please click on the Take Action button and urge your Senators to oppose the Cornyn-Schumer-Feinstein bill (S. 2135). Let them know that you are not fooled by the fraudulent claims that this bill is somehow an improvement for gun owners — when it’s not!

Urge Your Senators not to be Fooled by Fraudulent Claims

I can’t recall anything like this in recent memory. 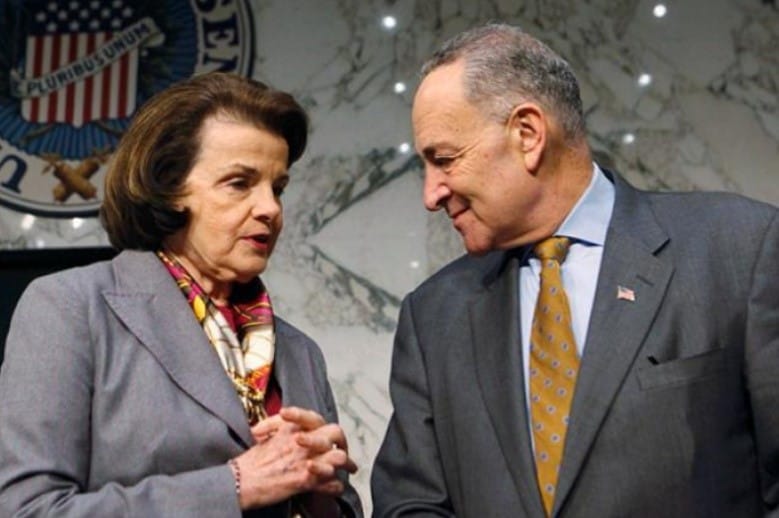 Some pro-gun supporters are clamoring for legislation that has the “who’s who” of the anti-gun Democrat movement cosponsoring it.

The sponsors of the Cornyn-Schumer-Feinstein bill (S. 2135) are appealing to pro-gun supporters by fraudulently holding out section 2(2) of their gun control bill as some big achievement. They claim it will require records corrections within 60 days for people erroneously denied under the Brady Law.

But guess what?  The Brady Law itself, at Statutes at Large subsections (f) and (g), already requires the FBI to give a reason for a denial in five business days, and provides that “the Attorney General shall … IMMEDIATELY correct all federal records relating to the prospective transferee…”  (Emphasis added.)

So section 2(2) actually takes current law and makes it more unfavorable to gun owners.  And without sanctions for non-compliance at the FBI, neither current law nor the proposed law is worth the paper it is written on.

Feds are Already Flouting the Law

Current law, since 1994, requires the Attorney General (AG) to IMMEDIATELY correct erroneous federal records concerning a transferee.  Suffice it to say that, of the 95% percent of denials that are “false positives,” large percentages of the people currently denied never get their rights vindicated.

The process starts under Statutes at Large subsection (f), which requires the AG to provide a “reason” for the denial within 5 business days.  This almost never happens, and the FBI’s response is most often some variant of “Make me!” With no sanctions, this provision, and section 2(2) of S. 2135, are meaningless.

In fact, the previous paragraph understates the problem.  The Obama administration publicly and deliberately negated the appeals process.  Obama’s minions illegally diverted every single one of its FBI appeal examiners to other duties, making it impossible for the agency to overturn people’s denials and creating a huge backlog.

So here’s the problem when we’re faced with the next anti-gun president.  The “immediate” (or 60-day) deadline will never be triggered because the information necessary to trigger it will never be disgorged from the FBI.

Suffice it to say that, if you can’t get the FBI to tell you why your transaction was denied, you can’t bring this unascertainable information to the attention of the Attorney General for the purpose of invoking subsection (g) under current law — or section 2(2) of S. 2135.

Meanwhile, Cornyn-Schumer-Feinstein will result in the names of millions of decent Americans being added to the NICS system, as our recent alert and Fact Sheet indicate here and here.

If you want a laugh, check out the latest Firing Back podcast, where GOA’s Erich Pratt and his cohost discuss how hypocritical anti-gunners can be!

There are other ways that the FBI avoids accountability.

One method is to give a purchaser a permanent “yellow.”  Most large gun retailers will refuse to sell a gun to a person with a “yellow” indicator, even though they can legally do so after three days under the Brady Law.  But, the question remains: How can you appeal a “We Don’t Know” determination?

Then, as we have noted, there is currently a statutory 5-day intermediate deadline, and an “immediate” correction requirement, which are almost never complied with.

And the worst part?  While there are no sanctions against the Attorney General for failing to enforce the fake deadline for correcting information, there ARE REAL SANCTIONS IN THE BILL against any federal agency or state that fails to turn in more gun owners’ names to NICS.

So please contact your U.S. Senators.  Let them know that you are not fooled by the fraudulent records correction requirement in Cornyn-Schumer-Feinstein — that is actually MORE ANTI-GUN THAN THE CURRENT LAW.

P.S. Resist the fraudulent claims coming out of Washington and urge your Senators to oppose the Cornyn-Schumer-Feinstein bill (S. 2135).  And don’t forget to check out the latest Firing Back podcast, where Erich Pratt and his cohost discuss how hypocritical anti-gunners can be!