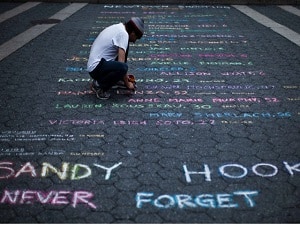 It has been five years since 20 school children were shot and killed at Sandy Hook Elementary and Democrats still oppose armed protection for school children.

Six faculty and/or staff members were also killed in the Sandy Hook attack yet Democrats still oppose allowing teachers to be armed for defense of themselves and their students.

In fact, California Democrats recently voted to rescind K-12 teachers’ ability to carry in the classroom. Although the teachers who carried had to have a concealed carry permit and their district’s permission–and although their had not been a single incident, accident or otherwise, involving an armed teacher–Democrats voted to disarm them, making them sitting ducks like the faculty and/or staff at Sandy Hook Elementary. California Gov. Jerry Brown (D) signed the legislation into law on October 14, 2017.

On December 14, 2012, a 20-year-old attacker entered Sandy Hook Elementary with guns he had stolen; guns he had already used to kill his own mother. Sandy Hook was a gun-free zone, but gun-free zones only apply to law-abiding citizens. He entered and had over 9 minutes with no armed resistance. The Sandy Hook Advisory Commission Report indicates the attacker entered the school just before 9:30 a.m. and the first officer responded at 9:39. This time-frame undercuts the myriad claims that his use of an AR-15 allowed him to kill more people. In truth, any type of gun would have worked because his victims were unarmed and, therefore, defenseless. Time was on the attacker’s side.

Consider another scenario–Almost a year after Sandy Hook, December 13, 2015, an 18-year-old entered Colorado’s Arapahoe High School with a shotgun. Although shotgun is far deadlier than an AR-15 in closer quarters where people are heavily congregated, the attacker was only able to kill only one person because the school had armed protection. The Christian Science Monitor reported that the school’s armed guard began running toward the sound of the shooter as soon as the first shots were fired. As a result, “the heavily-armed shooter realized he was about to be confronted by an armed officer and took his own life.”

Why would anyone trust Feinstein and Schumer to support their gun rights?