Gun Owners of America condemned the bills’ passage, saying the legislature is “ignoring the voice of the people on gun control.”

The Virginia House of Delegates passed seven Democratic gun reform laws 10 days after large protests at the state capital over the proposed measures. 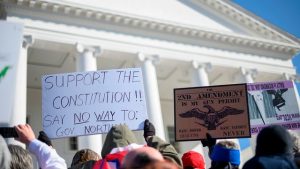 The bills include regulations implementing universal background checks and “red flag” legislation allowing officials to take guns from those determined to be dangerous to themselves or others.

The other regulations involve requirements to report lost and stolen firearms, a limit of one handgun that can be bought per month, rules to ensure those under protective orders cannot own a gun, child access prevention and legislation giving local officials the authority to determine how firearms are regulated in public spaces…

The nation had its eyes on Virginia when pro-gun activists took to Richmond earlier this month to protest the reform bills, prompting Northam to declare a state of emergency.

At least 91 out of 95 Virginia counties, in addition to other localities, have now declared themselves “Second Amendment sanctuaries” where local officials say they will not enforce gun restriction laws.

Gun Owners of America condemned the bills’ passage, saying the legislature is “ignoring the voice of the people on gun control.”

“Gun-grabbing Democrats in Virginia seem to be headed for that same electoral cliff, because voters will ‘remember in November,’ ” group [Senior Vice] President Erich Pratt said in a statement.