Virginia Dem introduces gun control bill again, but now with the majority in both chambers 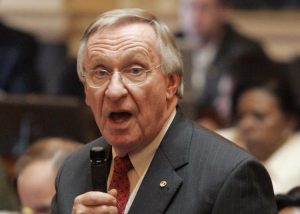 A Virginia Democrat introduced a bill to expand the commonwealth’s background checks by closing what is often called the “gun-show loophole.”

Currently, state law permits a person to purchase a gun without getting a background check if the transaction occurs through a private sale at a gun show or through any other unlicensed dealer. House Bill 2 would extend background check requirements to all private transfers of these weapons with the exception of transfers between family members.

Del. Ken Plum, D-Fairfax, told The Center Square in a phone interview that he had introduced similar legislation about a half a dozen times, but the bills failed to pass through the Republican-controlled legislature. In November, Democrats took control of both legislative chambers with the promise to pass more gun control legislation…

Erich Pratt, senior vice president of GOA, told The Center Square in an email that Democrats in swing districts could run into trouble with getting re-elected if they support expanded checks.

Pratt said that expanding background checks would be ineffective in stopping crime and could have negative effects, such as opening the door to a gun owner registration.

“The Obama administration correctly conceded in 2013 that universal background checks are not possible without comprehensive gun owner registration,” Pratt said. Arguing that the legislation would be ineffective, he said, “Chicago and Baltimore have Universal Background Checks, which means that no one there can legally purchase a firearm without getting permission from the government. And yet, these cities have two of the highest murder rates in the country.”

Pratt also said that 95 percent of denials for gun purchases are false positives, which means that most people who are denied access to guns have a legal right to own them…