After the Texas Legislature failed to act this session to protect the rights of law-abiding gun owners, a growing number of Texas counties are declaring themselves Second Amendment “sanctuaries.” 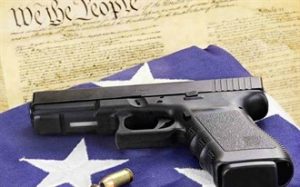 In the past week, seven Texas counties, including Metroplex-area Kaufman, passed resolutions affirming citizens’ right to keep and bear arms, as protected by the U.S. and Texas Constitutions. The total is now 15, and more counties are set to join the list.

They are part of a nationwide movement demanding preservation of gun ownership rights against unconstitutional threats.

The declarations are designed to defend against threats of state and federal restrictions on law-abiding gun owners, from “red-flag” laws, which allow authorities to disregard due process and confiscate firearms from people the government deems dangerous, to sweeping gun-grabbing schemes from far-left Democrats like failed presidential candidate Beto O’Rourke.

“These resolutions are a strong, positive step forward in asserting the responsibility and authority of the county sheriff … in upholding constitutional rights,” said Gun Owners of America Texas Director Rachel Malone…

ATF pick kept in limbo by lack of GOP support