ATF pick kept in limbo by lack of GOP support 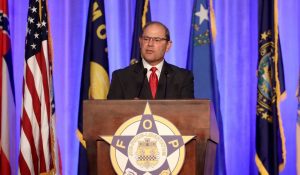 President Trump’s pick to head the U.S. Bureau of Alcohol, Tobacco, Firearms and Explosives is stuck in limbo nearly two months after a Senate committee postponed a vote to advance his nomination.

Chuck Canterbury, the head of the national Fraternal Order of Police, was supposed to be voted out of the Senate Judiciary Committee in September, but the vote was delayed because of a lack of Republican support.

The ATF has operated without a permanent director since 2015. As Mr. Canterbury’s nomination stalls, the agency faces an unprecedented crisis of staff shortages, an increased number of mass shootings and hundreds of agents retiring over the next few years…

It’s an open question how long Mr. Trump will stick with his nominee. A White House spokesman did not respond to requests for comments.

Senators aren’t the only ones who have expressed their frustration with Mr. Canterbury. Last month, Gun Owners of America, one of the most outspoken gun rights groups, urged its members to sign a petition opposing Mr. Canterbury’s nomination.

As head of the Fraternal Order of Police, Mr. Canterbury rankled some gun rights groups by pushing aggressive gun-control measures such as expanding background checks…