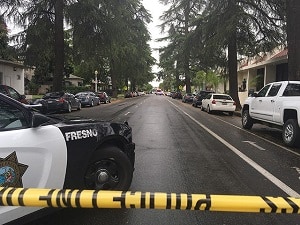 Every county in California is gun-controlled but that has not prevented someone from randomly shooting cars that are being driven in Fresno and Madera counties.

Four shootings in total have been reported since November 27.

According to the Fresno Bee, the Fresno County Sheriff’s Office detailed the four shootings:

▪ On Dec. 1, a vehicle traveling on North Dickenson Avenue near West Shields Avenue at 4:30 p.m. was hit by bullets. The female driver was struck and later treated for injuries that were not life-threatening.

▪ Three days later a motorist was driving on Madera Avenue near West Barstow Avenue at 4:30 p.m. when the vehicle was hit by bullets. No injuries occurred.

▪ On Dec. 7 a vehicle driving at 6:45 a.m. on Madera Avenue near Avenue 6 was hit by gunfire. Again, no injuries resulted.

In each instance the victims reported hearing gun shots as they were passed by a vehicle moving in the other direction. But none of the victims have yet been able to provide a clear description of the gunman or gunmen.

Fresno County Sheriff’s spokesman Toni Botti said, “We encourage all drivers to pay attention to their surroundings wherever they are and immediately report dangerous situations, including possible gunfire on the roadways.”