Written by Michael Hammond, as a special to the Daily Caller Published: 14 May 2019

House Democrats, led by Nancy Pelosi, are trying to push Republicans into a corner.

They have taken a catchy program that was originally created by Joe Biden and have added a liberal wish-list of provision to its reauthorization.

And they are daring Republicans to vote against it. 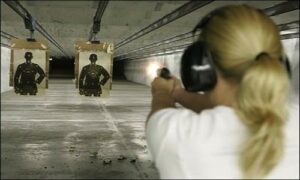 Welcome to the 116th Congress!

The program is the “Violence Against Women” reauthorization. Arizona Republican Rep. Debbie Lesko explained that among the new House-passed provisions is one which would allow “biological males who identify as women to be placed in shelters and prisons right next to vulnerable women.”

Gee, what could go wrong there?

Despite Pelosi’s assumption that no one would dare vote against a bill called “Violence Against Women” — no matter what its provisions — all but 33 House Republicans voted against it.

In fact, Georgia Republican Rep. Doug Collins predicted, “This radical legislation stands no chance of becoming law and is merely evidence of the majority’s regrettable intent to weaponize this important legislation to score political points.”

Neither Collins nor House Republicans would have imagined that a few senators and staff in the Senate would take the House-passed leftist wish-list and try to negotiate — with its liberal provisions as a starting point.

And there is evidence that most of the anti-gun agenda will be left in the bill — providing victories and momentum for anti-gun, anti-GOP dynasties such as Bloomberg, Giffords, and Brady.

Of course, no rational person would think that would be a good strategy for Republicans to pursue.

Now, over a hundred conservative and pro-gun groups — a who’s who of the conservative movement — have written to the Senate and demanded that the Senate throw the House draft into the waste basket.

On guns, the House bill, H.R. 1585, would allow anyone a gun owner has dated to strip the gun owner of their Second Amendment rights by convening a “secret court” — often by just a telephone call to a pliant judge.

Then, by simple allegations not backed up by any proof, the “angry jilted lover” could override constitutional protections by claiming that the person had “harassed” them or that they felt unsafe.

We know that accusers frequently lie, and seldom are called to account for it. In connection with Connecticut’s “red flag” gun confiscation program, researcher David Kopel has found that at least a third of initial restraining orders are bogus.

Not only that, Kopel recently testified before Congress how a California man, who was cheating on his wife, used the state’s red flag law to have police confiscate his wife’s Glock.

Some men will use temporary restraining orders to disarm significant others before assaulting them. So bills like H.R. 1585 can end up hurting the very people this bill is supposed to help, as abusers will be able to disarm their battered victims.

The first time the gun owner finds out about a gun confiscation order against him or her is when a SWAT Team arrives at their door in the middle of the night. We know of at least one case in which a black man in suburban Maryland was shot to death under these circumstances — with no remedy for his death whatsoever.

Hence, H.R. 1585 is like the gun confiscation or “red flag” laws rejected by virtually every non-blue state.

In addition, in Title XII, H.R. 1585 would create special prosecutors to go after veterans, traffic ticket scofflaws, and other innocents who inadvertently tried to buy a gun without realizing the government had barred them from doing so. This, at the same time as they’re releasing drug traffickers under last year’s sentencing reform bill.

For economic and social conservatives, the House-passed bill makes sure to expand unemployment compensation recipients, thereby imposing a large tax on employers.

And it would dramatically accelerate the movement toward removing faith-based programs as potential recipients of federal funds.

But there’s a larger question here.

House Democrats are testing the waters to see how the GOP will respond if they load up must-pass bills with leftist wish-lists.

If Republicans signal a willingness to negotiate over this tactic, the only question will be how many new liberal provisions of law Trump will be forced to sign.

Michael Hammond is the legislative counsel for Gun Owners of America, a gun rights organization representing more than two million gun owners. This article originally appeared in the Daily Caller.