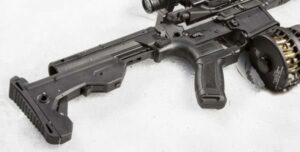 Marine Corp Private Ali Akazahg was convicted of possessing two machine guns, in violation of Articles 83, 107, and 134 of the Uniform Code of Military Justice [UCMJ]. These “machine guns” that Private Akazahg processed were bump stocks. The Private’s defense counsel argued that bump stocks did not meet the federal definition of machine guns. The ruling is found here and embedded below. US Military Courts Rules Bump Stocks Are Not Machine Guns.

A three-judge panel agreed with the defense, unanimously ruled that bump stocks do not meet the definition of a machine gun.

The judges laid out a case that anti-gun activists put political pressure on Congress after a mass murder in Las Vegas that saw 60 people die. A bill was set forth in Congress called “Closing the Bump Stock Loophole.” The bill would have treated bump stocks as machine guns. The bill failed to pass either chamber of Congress.

Modern bump stocks use recoil and do not contain a spring, and use recoil. Every shot requires a trigger pull. Since each shot was a single pull of the trigger, the judges ruled that bump stocks could not be considered machine guns.

Second Amendment groups on Biden mandate: If he can force a needle in your arm, can he take your gun?