Take Action to urge Governor Greg Abbott, Lt. Gov. Dan Patrick, and Speaker Dennis Bonnen to make sure Constitutional Carry comes up for a vote.  The prewritten messages are short, but editable, so that you can add your own comments (if you wish). Just a sentence or two is fine. Please be respectful but firm.

I have bad news: our Constitutional Carry bill (HB 357) is being stalled to death in the Texas House — and it’s even farther behind in the Senate. 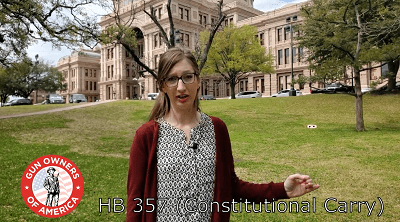 Unfortunately, Texas leadership does not appear to be prioritizing Constitutional Carry or any other legislation that would substantially reduce infringement on your right to keep and bear arms. Since the grassroots of their own party has identified Constitutional Carry as a legislative priority, we should have been able to count on Governor Abbott, Lt. Gov. Patrick, and Speaker Bonnen to listen and act.

However, their gun-related priority bills focus on items that either provide only narrow relief or that actually threaten your rights by increasing “mental health” restrictions and redefining mentally ill in dangerous ways.

Constitutional Carry is not necessarily dead. If leadership decides to act, it can absolutely still pass. But I have to be honest; that prospect is not promising.

HB 357 was assigned to the Homeland Security committee on February 22. The next step would be for the committee chairman to schedule a public hearing and a vote to allow the bill to move out of committee.

Chairman Poncho Nevarez has been promising the bill author a hearing “soon” for weeks. However, this week he announced that it will be “maybe April” before the bill is heard in the House.

Why is this happening?

Many conservative grassroots organizations — gun rights and otherwise — are finding that the legislature is failing to take significant action on their items.

We are being told that legislators who just came through difficult elections simply “should not have to take a vote” on “fringe” items such as Constitutional Carry.

But when the majority of states have some form of permitless gun carry … when over 30% recognize constitutional carry (including Kentucky, Oklahoma and South Dakota who passed their legislation within the past few weeks) … and when their own party has listed it as a priority … we think this hardly counts as a fringe item.

We elect legislators for them to get work done — not to play it safe out of fear. If they hope to win elections, then having a track record that includes doing nothing substantial is a very poor way of motivating people like you and me to volunteer for their campaigns and help turn out the vote.

Their reasoning is invalid, and the excuses are not acceptable.

Each committee chairman has full authority over when a bill is scheduled for a committee meeting or a vote to get out of committee. But the Speaker of the House appoints the committee chairmen and could easily take action to encourage prioritization of bills.

Unfortunately, Speaker Dennis Bonnen appointed Chairman Nevarez — someone known from previous sessions to be quite opposed to Constitutional Carry. And we have not seen Speaker Bonnen act to help Constitutional Carry get to the floor in a timely manner.

In the Senate, Lt. Gov. Dan Patrick has also failed so far to prioritize Constitutional Carry or ending gun-free zones.

And at the top of the State, Governor Greg Abbott chose to promote “mental health” focused initiatives to address “school violence” instead of freedom-based solutions, ignoring Constitutional Carry.

For this alert, I’ve given you a short response in the pre-written email. But it is editable, so that you can add your own comments (if you wish). Just a sentence or two is fine. Your own words will have far more impact than just relying on a form letter. Be respectful but firm.

Small reform or dangerous “mental health” targeted legislation is not the answer, and it’s time to have our rights recognized in Texas by getting rid of the license requirement to carry handguns and eliminating “gun-free” zones.

Please do not delay — send a note today. I cannot tell you how important it is for my work for GOA members to send a strong message that inaction is not acceptable. It’s time to get work done.

Grassley and Ernst are the Key to Defeating Gun Confiscation!