Colorado Senate Could Vote on Gun Confiscation at Any Time

Take Action below to email your State Senator in OPPOSITION to Red Flag Gun Grabs!  NOTE: You can use the box at the very bottom of this alert to CALL your state senator.

A senate committee has sent a gun confiscation bill to the floor, and it can now be voted on at any time. 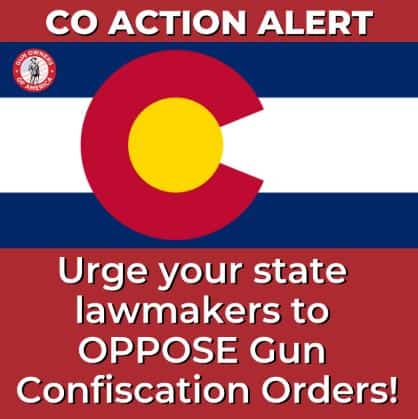 Under House Bill 19-1177, the police or an “angry ex” can make a telephone call to a judge, requesting that you be stripped of your Second, Fourth, Fifth, and Fourteenth Amendment rights.

Rather, all they have to show is that you are — subjectively, “dangerous” to someone — and then you lose your rights.

This is exactly what happened to 60-year-old Gary Willis of Ferndale, Maryland, who was shot to death by police serving a “red flag” order at 5:17 a.m. — after he, not unreasonably, came to the door with a gun in his hand.

Urge your state lawmakers, right away, to OPPOSE Red Flag Gun Grabs!  Tell them to vote NO on HB 19-1177.  Time is of the essence.