Trump Gets Pushback from NRA, Senators, 2A Organizations, and Opinion Molders Over His Push for New Gun Control Laws

Starting early last Monday morning, President Trump began calling his supporters and other policymakers for advice on what to do following the Dayton and El Paso mass shootings…

LaPierre added: “The NRA will work in good faith to pursue real solutions to the epidemic of violence in America. But many proposals are nothing more than ‘soundbite solutions’ which fail to address the root of the problem, confront criminal behavior, or make our communities safer.”

The next day Trump’s Tweet appeared to indicate a softening of his stance that his administration had to do something, even if it risked losing critical support of his primary base: gun owners. He tweeted:

Serious discussions are taking place between House and Senate leadership on meaningful Background Checks. I have also been speaking to the NRA, and others, so that their very strong views can be fully represented and respected.

Guns should not be placed in the hands of mentally ill or deranged people. I am the biggest Second Amendment person there is, but we all must work together for the good and safety of our Country. Common sense things can be done that are good [for] everyone. 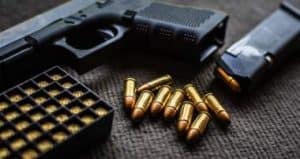 Rush Limbaugh was quick to remind his listeners that another law wouldn’t change anything: “There’s not a single new law that would change anything. The only thing a new law would do is it would drive a wedge between Trump and his voters and the NRA. Because, make no mistake, they [anti-gun politicians] want your guns. They want every gun you’ve got as quickly as they can get it.”

John Barrasso (R-Wyo.), the No. 3 Senate Republican said, “I have a lot of concerns about the due process component of [red flag laws] and I don’t want to punish law-abiding citizens.”…

Michael Hammond, legislative counsel for Gun Owners of America (GOA), described red flag laws as allowing “police to convene a Kafkaesque secret proceeding, in which an American can be stripped of his or her gun rights and Fourth Amendment rights, even though [they] are barred from participating in the hearings or arguing their side of the dispute.… If the Constitution can be suspended in a secret hearing, where does this lead?”

Read more at The New American