Thousands of gun-rights advocates packed the streets around the Virginia Capitol on Monday, bristling with weapons, flags and threats of insurrection but never erupting into the violence authorities had feared. 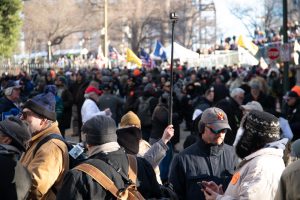 Armed militias carrying assault-style weapons marched in formation until the crowds grew too thick. Protestors without firearms filed through 17 metal detectors at a single entrance to Capitol Square, where Gov. Ralph Northam had temporarily banned weapons, and cheered fiery speeches about the Second Amendment.

This was the aftershock of last fall’s elections, when thousands of Virginia voters gave majorities in the General Assembly to Democrats who promised to enact gun-control laws. The losing side of that equation thundered through this city’s streets on Monday. They were joined by self-styled patriots from all over the country, whipped into a near-frenzy by social media calls – including from President Trump – to make Virginia the bulwark against any retreat on gun rights…

“Democrats in the state are demonstrating . . . unadulterated power without authority,” Erich Pratt, senior vice-president of Gun Owners of America, thundered in Capitol Square. “No one listening to my voice should ever…vote for the party of gun control, the party of Nancy Pelosi, Charles Schumer,” he said, interrupted by boos at the names of the Democratic leaders.

Inside the white-columned Capitol, the halls were strangely quiet as lawmakers went about their business. Young pages had the day off for safety; there was a skeleton staff, but beefed-up police presence.

Democrats who had met with pro-gun lobbyists Monday morning said they, too, were responding to thousands of fired-up constituents – the voters who put them into office on the promise of stricter gun laws…

Read more at The Hour