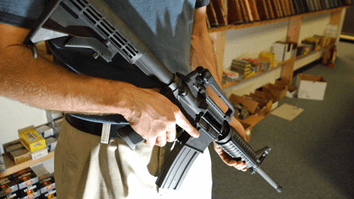 Three teenagers invaded a Tulsa, Oklahoma, area home by breaking through a glass door in March.

But as they entered a hallway, they were met by the homeowner’s 23-year-old son, Zachery Peters.

Peters had been awakened by the commotion of the forced entry.  He grabbed an AR-15 and opened fire as the intruders proceeded into a hallway.

Two of the invaders (all dressed in black and wearing gloves) were found dead in the kitchen.  The third was found dead outside in the yard.

Between them they had two knives and a pair of brass knuckles.

Leroy Schumacher, the grandfather of one of the dead invaders, admitted that what the boys “did was stupid,” but said they did “not deserve to die.”

“Brass knuckles against an AR-15?” Schumacher said.  “Come on, who was afraid for their life?”

One can understand Mr. Schumacher’s grief.  But he is imposing an unrealistic burden on the homeowner.

When under attack, should the victim be required to ascertain — during the very moment of an invasion — what kind of weaponry the invaders have so that the fight can be “fair”?

Does anyone really think that Schumacher would submit himself to such nonsense were his home being invaded?

Happily, Oklahoma law makes it clear that you forfeit all your rights during the act of a home invasion.

Mr. Schumacher’s morality is perverse.  Does he really want to argue that his grandson had the right to a “fair fight” during a home invasion?

By the way, a fourth perpetrator was involved in this crime.  The admitted “mastermind” behind the crime, Elizabeth Rodriguez, was waiting outside the house in a getaway car.

Pursuant to Oklahoma law, Ms. Rodriguez is being charged with three counts of murder for the crime she inspired.

We can hope that Oklahoma’s criminal justice system ensures that she is never able to commit another crime for the rest of her life.

Finally, I would say to Mr. Schumacher: yes, they did deserve to die.  Happily, they will never again be able to threaten someone else’s life.

State legislators in the rest of the country should ensure that the laws of their state protect victims as well as do the laws of Oklahoma.

For those legislators who have banned, or would like to ban the AR-15, had you had your way in Oklahoma, Mr. Peters could well have been dead from multiple knife wounds and concussions caused by the impact of brass knuckles.