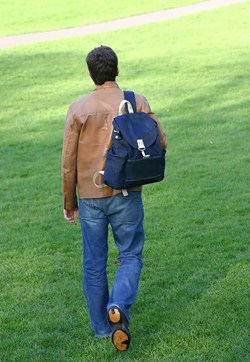 My initial reaction to the question is the same as yours.  Are students responsible enough to defend themselves?  Why would we want a gun on campus?  On second thought, we call a guy with a gun every time there is a problem, on campus or off.  We often forget that fact.  That highlights the real issue here.  The real problem is with our inaccurate imagination.  We have an idealized view of campus life, and a stereotypical view of students.  Let’s add a dose of reality before we answer.  We don’t have to ignore our experience as we simplify our ideas.  A school campus is a dangerous place today.  Some people on campus are precisely the sort of people we want to go armed, for both their safety and for the safety of others.  Education is supposed to help us differentiate between things that seem roughly similar, but are different in important ways.  Lets educate ourselves on this issue.

Schools have changed over time. Campuses and the cities they serve have moved closer together.  Students can leave campus and unwanted visitors can enter the campus with equal ease.  The campus today is also a business served by vendors of every kind.  Deliveries arrive at all hours of the day and night.  So, how does disarming the food delivery driver keep me safer?  We never bother to ask.

We never get past the slogans, such as, “Kids shouldn’t have guns on campus!”  Think about that for a minute.  The precocious and pimply faced 17 year old can’t legally carry off campus, so painting him as the face of campus carry distorts the question.  In addition, a student today is hardly the student you might remember from years ago.  A large percentage of today’s students have jobs and families.  Military veterans are returning to finish their degree.  Part time students go to school after working at their day job.  Older students return to school to retrain for a second career.  In fact, the very policeman you call when you’re off campus may be on campus tonight studying for her advanced degree.  Why should she be disarmed on campus?

Being a students changed in other ways as well.  Gone are the days of 3 ring binders.  Today, every backpack can be a treasure chest of phones, music players, computers, iPads, musical instruments, credit cards, and cash.  Those stolen items can usually be replaced after a crime.  Not always. Innocence is irreplaceable.

Rape and sexual assault on campus, and on the way to and from campus, affects someone for a lifetime.  Crime on campus is fairly equally divided between assault, robbery and rape.  Women in college are three times more likely to be victims of sexual assault when compared to women overall.  A fifth of undergraduates and a tenth of graduate students report sexual assault through physical force, violence, or incapacitation.   You can argue that undergraduates can not legally carry on campus therefore arming students would be ineffective.  That is only part of the picture.  Robbers and rapists have a difficult time telling the difference between a disarmed 20 year old and a returning veteran who is 22 years old.  Using a firearm for self-defense reduces the likelihood that an attempted rape will be completed by 90 percent or more.

Statistics only tell part of the story.  In many states, older students can carry discretely all day long..but not when they are on campus.  In some cases, disarming older students on campus may disarm them at their day job as well.  We never credit the increased rate of victimization of graduate students as being caused by a gun free campus even though the crime took place off campus.  We should.

“But, we don’t want kids with guns on campus!”

I get that. Let us have the debate of who should go armed and where, but let’s look at the reality and get past simplistic slogans.  Let’s look at real people.

How does disarming the contractor who trims the bushes on campus keep me safer?

How does disarming the EMT who is picking up a sick student at the campus health center keep me safer?

How does disarming the wheelchair-bound student who takes night classes keep me safer?

Saying “We don’t want kids with guns!” begs the question.  Which students are you talking about, and has a plastic “no-guns” sign on campus actually made us safer?  Fortunately, we don’t have to guess.  We know.