Take action NOW to defend your gun rights, and deliver a humiliating defeat to Terry McAuliffe.

As you know, Gun Owners of America has serious concerns about the “compromise” McAuliffe has offered in exchange for giving up the 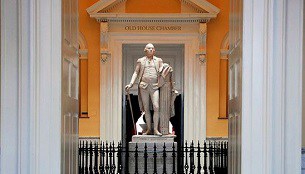 The “deal” purports to reinstate reciprocity — and even extend it to more states — but establishes “voluntary” gun show private background checks and imposes additional restrictions on persons with restraining orders.

It also creates a precedent in which the governor can get the General Assembly to compromise away gun rights by issuing unconstitutional orders he can then use as bargaining chips.

There are four bills right now in the General Assembly that restore all or most of what was taken by McAuliffe, without us having to give up our gun rights in return.

One of the bills has already passed the House and is now in the Senate.  The other three House bills have been authored by Del. Bob Marshall (R-13).

HB 766 (by Del. Gilbert) would allow people who are protected by a protective order to carry a concealed handgun without getting a permit.

This bill, which passed the House by a 68-29 margin, is brilliant.  McAuliffe will have to choose whether to sign the bill — or to veto it, thus opposing any help for battered women.

HB 1201 (by Del. Marshall) will restore reciprocity for CCW permit holders to the same states that Virginia had reciprocity with prior to Attorney General Herring’s order that 25 of the 31 did not meet Virginia’s standards.

HB 132 (by Del. Marshall) establishes that if a citizen with a valid concealed carry permit is injured or killed as a result of the action of a third party in a building, park or other facility owned by the Commonwealth where carrying concealed has been prohibited by Governor Terry McAuliffe’s recent executive order 50, that the state will be liable for the cost of the damages to that individual plus an additional $350,000.

HB 133 (by Del. Marshall) establishes that if a citizen with a valid concealed carry permit is injured or killed as a result of the action of a third party in a property or facility owned by a public college or university which prohibits the carrying of a concealed weapon, then the college or university will be liable for the cost of the damages to that individual plus an additional $350,000.

If any of these bills are added as amendments to a must-pass legislation, we can deliver a humiliating defeat to Gov. McAuliffe.