Stop Legislation in Concord That Will Expand Gun Control

ACTION: Contact your representative(s) and urge them to oppose House Bill 1696.

The politics of protecting our gun rights is a strange thing.

There are bills that some people would never think would have an impact upon Second Amendment rights.  But then, they would be wrong. 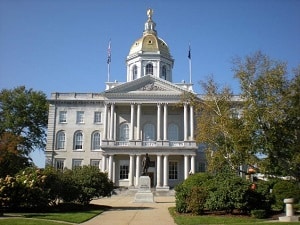 House Bill 1696 is an example of such a bill that would not appear, at first blush, to impact gun owners.

This bill, which is expected to be considered by the New Hampshire House on Wednesday, would extend the expansion of ObamaCare-related Medicaid coverage through 2018 or 2020 (depending on whether an amendment to the bill is accepted or not).

In view of the anti-gun “executive actions” announced by Barack Obama on January 5, such an extension could have serious anti-gun ramifications.

And that’s why we are asking House members to oppose that legislation — at the very least, until it is amended to deal with its anti-gun aspects.

Since the passage of the NICS Improvement Act of 2007, it has been theoretically possible to use diagnoses under Medicaid to strip recipients of their right to possess a firearm.

Thus, Medicaid recipients with PTSD, early-onset Alzheimer’s, post partem depression, and any of a host of other disabilities could simply have their names forwarded to the NICS system — which would have the effect of stripping them of the right to acquire new firearms or even to keep the firearms they currently have.

That is because that act defines a “mental defective” as a person which presents “a danger [however tiny] to himself or others.”

Furthermore, the 2007 law allows that determination to be made, not by a court, but by a diagnosis by “any lawful authority,” which includes a psychiatric diagnosis in connection with any federal program.

In theory, the law enforcement or military personnel diagnosed with PTSD have a right to a hearing, but only if they bear the $10,000+ cost of hiring an attorney and expert witnesses.  In practice, almost no one has the resources to do this.

Prior to January 5, more than 175,000 law-abiding veterans had been stripped of their gun rights pursuant to this process by the VA.

But, up until January 5, the administration had not extended these gun bans to recipients of Social Security, Medicare, and Medicaid.

That changed with the announcement of Obama’s anti-gun “executive actions” on January 5.

Included in these “executive actions” was a move to troll the Social Security rolls for seniors and disabled persons who could have their guns taken away in the same way that veterans had been.

The Los Angeles Times had earlier reported on rumors of such a move, and had estimated that up to 4.2 million seniors could have their guns taken away — with no real due process.

And if social security recipients — which are NOT a high-crime demographic — are losing their guns rights, Medicare and Medicaid will not be far behind.

New Hampshire is a state which values the Second Amendment. And the last thing we need is for thousands of Granite Staters to be lured into Medicaid “free money,” only to find out that that “free money” comes at the cost of their constitutional rights.

Contact your representative(s) and tell them to oppose House Bill 1696 — at least until it is amended to prohibit the Obama administration from trolling the Medicaid rolls in order to strip recipients of the right to possess firearms.