Click on the Take Action button to urge your state lawmakers and Governor Matt Bevin to support Constitutional Carry!

The constitutional whirlwind which has swept across America may soon be blowing through the Kentucky bluegrass.

That whirlwind — Constitutional Carry — would make Kentucky the 16th state in the country to recognize the right to protect yourself and your family without first getting the government’s permission.  This would mean that nearly a third of the fifty states would be “Constitutional Carry” states. 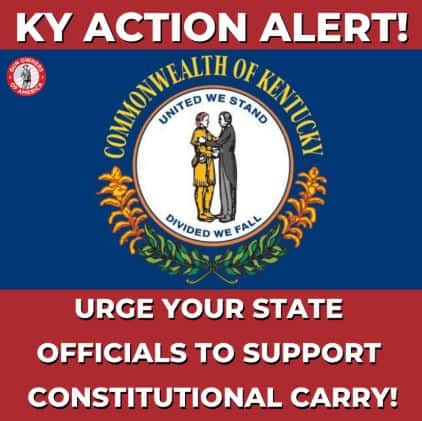 At its core, it’s simple:  The bill would legalize concealed carry and “vehicle carry” without a permit for honest citizens 21 and over.

It would allow you to get an optional permit for purposes of reciprocity and Brady Check exemption — but would not require it in the Bluegrass State.

But, as in other states, this extraordinary victory won’t just fall into our laps.  It will take the efforts of all of gun owners across the Commonwealth to push SB 150 through the Kentucky House and Senate and onto the governor’s desk — and to secure the governor’s signature.

The bill is scheduled to be heard in the Kentucky Senate Veterans, Military Affairs and Public Protection Committee on February 14th. If you can, please attend the hearing. But if not, your state lawmakers still need to hear from you.

So please take action and urge your elected officials to support SB 150! You can contact your state representative, senator and governor with just a few clicks!

P.S. Please urge your state lawmakers and Gov. Bevin to support Constitutional Carry. And if you’ve let your membership lapse, make sure to renew your membership in Gun Owners of America today for only $20!