The Second Amendment rights group BamaCarry held their 2019 Legislative Conference on Saturday at the Jasper Civic Center in Walker County. Over 230 people were on hand to promote the expansion of gun rights in Alabama….

“The left has been making an incredible push for more gun control at the national levels and at the state level,” said Gun Owners of America Executive Director Erich Pratt. 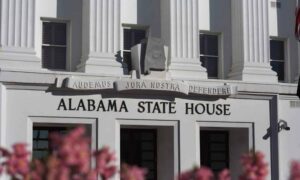 “[The mainstream media] are giving you story after story in order to try to dispirit you,” Pratt said. “With the exception of Florida, we saw the blue states get bluer and the red states getting redder. Gallup does a survey of the most important issues to the American people, and last October, the desire for more gun control was not even in the top 15.”

“The left wants to dispirit you,” Pratt said. “They want you to think that we have reached a tipping point where the majority of Americans want the Second Amendment repealed.”

“At GOA we try to make it very easy for you,” Pratt continued. “We alert you when legislation comes down the pike that is a threat to your right, and we notify you when there is good legislation we need to support. The biggest battle we are going to be fighting this year is the red flag gun confiscation orders.”

“They allow your guns to be confiscated even though you haven’t been convicted of a crime or even accused of a crime,” Pratt said. “All it takes is someone, usually a family member, to say that they are dangerous.”

We have already lost one over this, Pratt said. Gary Willis in Maryland said police came to his door and shot him at 5:15 a.m. A distant relative reported him as dangerous because of a family argument at Thanksgiving. The first time you find out that there has been an order against you is at 5:15 a.m. The police banged on his door. He had his cell phone in one hand and his gun in his other like all of us would if someone was banging on the door at 5:15 a.m. The police shot and killed him.

Pratt said that GOA and BamaCarry were together suing the Trump administration over the ban on bump stocks. The ATF is claiming that a bump stock makes an AR-15 into an illegal machine gun.

He said the measure is too broad, violates previous ATF rulings on the matter and could be written in such a way as for a future more liberal administration to rewrite the rules so that AR-15s could be outlawed as being illegal machine guns under the National Firearms Act of the 1930s.  Pratt said that in the best case scenario the court would just rule the NFA unconstitutional.