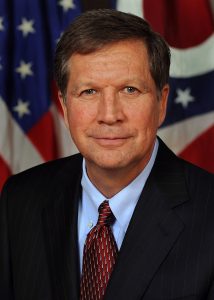 “Former Ohio Gov. John Kasich, a Republican and frequent Trump critic, has been approached and is expected to speak at the Democratic National Convention on Biden’s behalf next month, according to a person with direct knowledge of the plans who insisted on anonymity to discuss strategy,” the Associated Press reported Monday. “Kasich is among a handful of high-profile Republicans likely to become more active in supporting Biden in the fall.”

Kasich is the latest in a string of “Never Trump Republicans” to cast his lot with the Democrats, the very Party his past supporters donated money and labor to defeat at the polls. We’ve noted subversive efforts by groups like the Lincoln Project and watched prominent “neocons” like George Conway, Bill Kristol, and Carly Fiorina jump ship. We’ve seen “Big Tent Republicans” like Larry Hogan making no secret of abandoning what once was a Republican core constituency to move the GOP even further to the left. And just the other day, “conservative” columnist George Will announced he’s voting for Biden.

Since they’re all gun-grabbers, it’s fair to ask: With Republicans like them, who needs Democrats?

Especially when Kasich gives us a textbook example of a backstabbing liar who will say anything to get elected and then betray everyone who voted for him based on what he promised.

We’re talking about a politician who, when it served his purposes, bragged about his “A” grade and endorsement from NRA.  Now he’s promoting a candidate who has made evisceration of the Second Amendment a campaign priority.

Not that Kasich meant anything he promised to swindle gun owners into voting for him. Except he called infringements “reforms.” He came out against “Stand Your Ground” and even vetoed a gun bill that didn’t have it because it didn’t include “guilty until proven innocent” Red Flag seizures.

That should have surprised no one. As a congressman, he was one of 46 Republican members who helped pass the 1994 semi-auto ban by a narrow 216-214 vote margin, putting him on a first-name basis with Bill Clinton…

Well, we know what those “A’s” are worth, and you’d think somebody at Fairfax would grok if you cheapen them anymore, true “pro-gun” politicians may start to see them as a liability. One national gun group that wasn’t “fooled” was Gun Owners of America, which fleshed out the details of Kasich’s serial betrayals and noted in 2016 that “Leftist billionaire George Soros, through his Soros Fund Management, is one of John Kasich’s top financial contributors.”