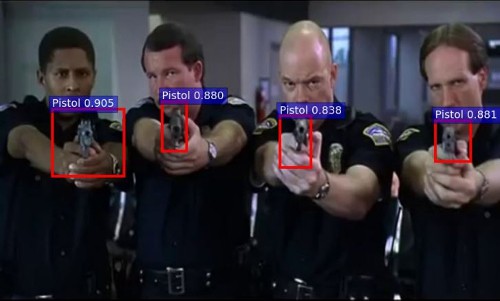 I reckon the ShotSpotter gunshot detection system is a huge waste of money. TTAG’s resident war hero Jon Wayne Taylor agrees — having seen the system’s lack of value in Afghanistan. Jeremy disagrees. No matter how you slice it, the audio-based system could soon be obsolete.

The researchers trained the artificial intelligence on low-quality videos from YouTube and movies from the 90s, such as Pulp Fiction, Mission Impossible and James Bond.

The algorithm showed an effectiveness of over 96.5%,  detecting guns with high precision by analyzing 5 frames per second, or in real time.

When a handgun appears in the image, the system sends an alert in the form of a red box on the screen where the gun is located.

UGR professor Francisco Herrera says the artificial intelligence can be easily combined with an alarm system and implemented inexpensively using video cameras and a computer with moderately high capacities.

He also says the system can be implemented in any area where video cameras can be placed, indoors or outdoors, and does not require direct human supervision.

Well he would say that, wouldn’t he? And any AI-based firearms detection device would have to be based on video surveillance (obvs.). So unless America is heading down the cameras-everywhere path trod by the United Kingdom — the most surveilled country on planet earth — video AI gun detection’s utility would be strictly limited.