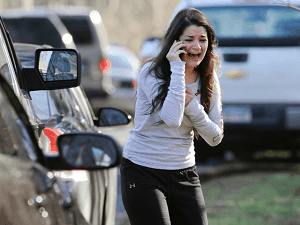 On the fifth anniversary of the heinous attack on Sandy Hook Elementary School a daughter of one of the school’s teachers said that campus carry “creates a dangerous environment” for students and teachers alike.

Sarah Clements said this even though her mother, a second grade teacher at the time of the attack, was in a gun-free zone and scrambling for ways to hide school children while the armed attacker methodically killed his defenseless victims.

Clements told MTV, “Many states right now that have either passed or are considering passing campus carry legislation, which means that college students could very well be allowed to carry a firearm in their backpack or on their body in the classroom, around campus, in academic buildings, etc., which creates a dangerous environment for students and faculty.”

Her suggestion that armed law-abiding citizens create a “dangerous environment” on campus is perplexing, to say the least. After all, Clements, via her mother’s experience, knows firsthand that criminals do not adhere to campus gun bans. Therefore, criminals are armed and pose a threat whether campus carry laws exist or not. The logical solution to this is to be sure law-abiding citizens can be armed to defend themselves.