George Bush “never recovered from [his broken promise on taxes] and it’s probably one of the key reasons he did not get reelected in 1992. Same kind of potential pitfall is out there again awaiting Trump [on gun control].” — Rush Limbaugh, August 9, 2019

You know, I don’t know if it’s become apparent to everybody yet, but [the Left Wingers are] not going away. And you cannot satisfy them. You cannot make them happy. You cannot compromise with them.

Like they’re talking about gun control. Don’t give them a thing! It’s not gonna buy us anything! … Trump is making it appear that he’s got some negotiating room with the left on gun control things.

I know this. I know that there are people in the West Wing, in the Trump administration, urging him to do it, swamp-dwelling Republicans. Just like there were people in the George H. W. Bush West Wing, “You’ve gotta compromise on that tax cut promise you made. You gotta do it! You gotta raise taxes, you gotta give the left something.” George H. W. Bush who had said “Read my lips: No new taxes” raised taxes. And any kind of a deal with the Democrats on guns is going to risk the same fate happening to Trump…. 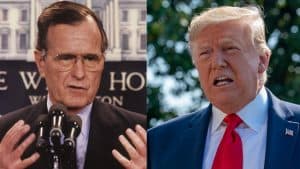 And people make the ongoing mistake — I’ve been watching this mistake made for 30 years — thinking that you can calm them down, make them go away, make them like you, make them drop the issue, even, if you just compromise with ’em. It never works because they’re never happy because their objective, as is now plain as day, is wiping us out. Plain as day. There is no desire for peaceful coexistence or compromise. Their objective is to wear you out and to wipe us out. No two ways about it.

RUSH: Now, up next were some comments on the NRA. Now, Trump loves the NRA, and the NRA loves him. But there is a potential pitfall lurking ahead as the left continues to ramp up its pressure in the aftermath of these shootings. There isn’t a person in the world who thinks that new laws are gonna change or end the shootings, including the people who want to take your guns away. Nobody thinks that. That’s just what they want you to believe they think. Everybody knows we have enough laws on the books.

Every one of these shooters already violated some law — including murder! You don’t need any more laws. There’s not a single new law that would change anything. The only thing a new law would do is it would drive a wedge between Trump and his voters and the NRA. ‘Cause make no mistake, they want your guns. They want every gun you’ve got as quickly as they can get it. They want guns out of your hands. When the movie The Hunt becomes real, they don’t want you to have a way of firing back.

They don’t want you to have the freedoms that are codified in the Bill of Rights and the United States Constitution. This is not an exaggeration. This is who they are. And the pressure that is always on Republican politicians to bend and flex and to compromise and to somehow show that we’re not racists, that we’re not nationalists, that we’re not uncaring about people getting shot? This is this kind of thing that leads and has led in the past to Republicans making stupid deals.

Talk about stupid! These stupid compromise deals with the left, with the Democrat Party on things they claim are of great importance to them. And it’s always done never so solve the issue. There isn’t a person in the world who believes that any gun control compromise is gonna fix this. What they’re trying to do on our side is (sobbing), “Limit the criticism! Stop saying these things about us. We want to show the American people we’re not what you say.” That’s been going on my whole life too.

Republicans feeling compelled to do things and say things so that the people of America will see the media and the Democrats are wrong. How has that worked out for anybody? The Democrats are still saying it no matter how much they’ve been given. They will continue to say it no matter how much they give them. Folks, if they succeed… Just to give you an analogy, an example, if they ever succeeded in eliminating the Second Amendment, do you think they would go away?

Nope. Then they’d go for the First Amendment, if it still was in place. And then after those, they would go for every other codification of freedom until there isn’t any more. That’s what they’re truly opposed to is freedom and all the manifestations of it. Here’s Trump on the NRA, and you’ll hear him say he spoke to Mitch, he spoke to senators, and they’re gonna take a hard line on the Second Amendment.

THE PRESIDENT: I have a great relationship with the NRA. I have a lot of respect for the people at the NRA. And I have already spoken to them on numerous occasions. And, frankly, we need intelligent background checks, okay? This isn’t a question of NRA, Republican, or Democrat. I spoke to Mitch McConnell yesterday. He’s totally on board. We don’t want insane people, mentally ill people, bad people, dangerous people…

We don’t want guns in the hands of the wrong people. I spoke yesterday to Nancy Pelosi. We had a great talk. I spoke to Chuck Schumer. We had a great talk. We have tremendous support for really common-sense, sensible, important background checks. Look, the NRA has over the years taken a very, very tough stance on everything — and I understand it. You know, it’s a slippery slope. They think you approve one thing and that leads to a lot of bad things. I don’t agree with that.

RUSH: Now, I’m just gonna tell you that your basic Trump voter doesn’t want Trump talking to Nancy Pelosi or Chuck Schumer about this. They are not the people to talk to about guns, background checks, intelligent background checks. We don’t want insane people, mentally ill people, bad people, dangerous people having guns in their hands. Well, who gets to sit there and determine who’s insane and who isn’t?

So I’m gonna tell you, this is a potential red flag, and I just want to remind everybody, “Read my lips: No new taxes.” George H. W. Bush thought that he was demonstrating to Americans that he had compassion. The media was out there, Democrats were talking about what a cold-hearted guy he was, people were going hungry because of these tax cuts, Bush needed to raise taxes, blah, blah.

And finally, because he thought he could work with Tom Foley, because he thought he could make a deal with Tom Foley. He didn’t trust George Mitchell in the Senate, but he loved Foley. He thought they could make a deal. And he never recovered from it. Never recovered from it and it’s probably one of the key reasons he did not get reelected in 1992. Same kind of potential pitfall is out there again awaiting Trump [on gun control].

And again, not to be redundant, but I think his instincts are fine, but I’m telling you there have got to be, because of the law of averages, there are people in the White House who are career Washington people who live and think as swamp dwellers do who believe that they can sue the Democrats for peace or they need to do something to show the American people that they’re not gun crazy racists or what have you.

And so they’ll want Trump to make some kind of deal. I guarantee you he’s being pushed. I don’t know who these people are. Don’t misunderstand. I just know that they’re there. I mean, there are people in the Trump White House who are trying to sabotage his policies in a lot of different places.

RUSH: Now, I probably don’t have to do this, but I’m gonna explain to you why I think this Amendment II, gun control thing is so crucial. It’s an issue the Democrats have lost totally. Remember us marveling in 2008, 2012, 2016, the Democrats laying off of gun control. Remember John Kerry going (imitating Kerry), “Is this where I get me a huntin’ license?”

And Hillary Clinton putting on the fatigues like she’s gonna go out there and hunt sharks in Iowa, whatever she thought she was gonna do. They have totally lost the issue of gun control. It is polling way, way against them. Then these shootings happen and guess what happens? The left gets reenergized about it.

Now, we say this with caveats because Trump does this a lot. Appears to bring ’em in — he’s done this with Dianne Feinstein on a number of things, and then the next meeting or a week later, he drops the hammer on ’em. So I’m not raising the panic flag here yet, folks. I’m just telling you, it’s a pitfall out there, potential.