New York-style gun control may be on its way to Pennsylvania, as FOUR similar, so-called “red flag” gun confiscation bills have been introduced in the state legislature.

Pennsylvania Democrats and RINO Republicans have teamed up to assault your constitutional rights. 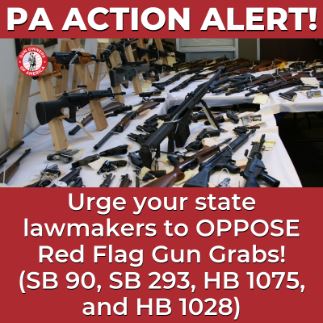 Here’s what GOA’s Legislative Counsel Michael Hammond has to say about red flag laws like these:

Under these bills, the police or an “angry ex” can petition a judge, requesting that you be stripped of your Second, Fourth, Fifth, and Fourteenth Amendment rights. Your accuser will be the ONLY ONE in the room.

And it doesn’t end there. We’ve had some experience with “petitions” like this. And, when only the hysterical accuser is present, a pliant judge will normally sign anything that is put before him.

In New Mexico, one judge issued a restraining order against Dave Letterman for supposedly sending coded messages to a New Mexico housewife, by way of her TV set.

So, after a pliant judge has given the okay to a request, you lose your constitutional rights with NO DUE PROCESS. The next thing that happens is that the police arrive at your door in the middle of the night, ready to ransack your house and, if you resist, to arrest or kill you.

Sure, you’ll get a hearing in 10 days — where you can hire an attorney for thousands of dollars to try to convince the judge he made a mistake.

Even the ACLU branches in Pennsylvania and Rhode Island have issued memos in opposition to “red flag” laws. The Rhode Island branch offered a 14-page analysis detailing “some serious due process concerns.”

But, if you want to turn Pennsylvania gun ownership into some horrible nightmare, these bills are the vehicle to do just that.