On Tuesday, January 19th, Sarah Palin left most conservatives wondering why she endorsed Donald Trump for President instead of Ted Cruz, who she supported just four years ago. 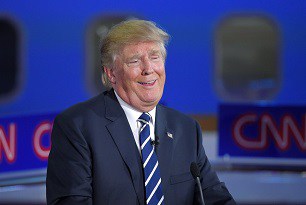 In her normal attack dog style, Palin made it sound like the Donald would fix everything that’s wrong in the current left-wing world of Obama if he is elected to the most powerful political post in the world.

The problem with this, as Sarah should know, is that the facts tell a different story. Trump has been on both sides of most issues so often you need a huge score card to keep up.

Consider his flip-flopping on the gun issue:

Donald Trump, (2000) – “I generally oppose gun control, but I support the ban on assault weapons and I support a slightly longer waiting period to purchase a gun. With today’s internet technology we should be able to tell within 72-hours if a potential gun owner has a record.”

Donald Trump hotels and other Trump properties – The leftist blog ThinkProgress points out Trump’s hypocrisy in an investigative report entitled Donald Trump Thinks You Should Be Able To Bring Guns Anywhere, Except His Own Hotels.

According to the article, “reporters spoke with a number of hotels and golf courses in the Trump Empire and found that multiple locations were gun-free zones, even for guests with concealed-carry permits.”

What that means is that Trump might be the only one who is allowed to carry on his own properties.

3) Donald Trump, candidate 2015-2016 – “I have a permit to carry a concealed gun.  I believe Americans have the right to protect themselves.”

But, again, it doesn’t matter if someone has a carry permit when they are in one of Trump’s properties.  An employee at Trump’s National Golf Club was asked whether the gun ban applies even to those with a concealed-carry permit.  The answer?  Yes, “with a permit we still don’t allow firearms.”

As all the current hype over the Sarah Palin endorsement runs its course in the press, I wonder if voters in Iowa and New Hampshire have considered that Donald Trump, today’s “conservative pro-gun hero,” could well become a disaster for gun owners if he reverts to the “old” Donald after the election.

In contrast, Cruz is a constitutional conservative who led 31 states before the United States Supreme Court in a critical case to protect the Second Amendment, along with other cases protecting constitutional liberties.

Cruz is one of only a small handful of Senators who stood up against the Democrats and some Republicans and were critical in stopping all the anti-gun legislation introduced in 2013, just after he was elected to the Senate.

Our Gun Owners of America staff worked closely with Senator Cruz’s staff during this battle and we know just how critical he was to stopping ALL of the anti-gun legislation that, early in the battle, everyone said would pass after the shooting at Sandy Hook. Americans owe a huge debt of gratitude to Ted Cruz.

In short, Cruz has “walked the walk” while, until now, Trump has only “talked the talk.”

On September 8th of 2015, Gun Owners of America endorsed Ted Cruz for President . . . and we haven’t changed our mind. We just hope Sarah Palin comes to her senses and changes hers.

Lost and Found Rifles: Proof Optics Can Outlast their Guns