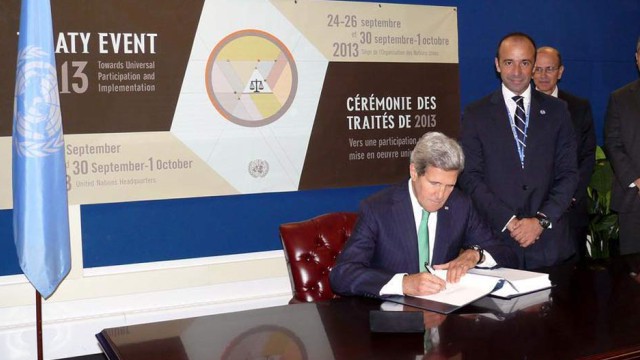 President Obama transmitted the controversial Arms Trade Treaty, which seeks to regulate the world’s annual exchange of $70 billion in conventional weaponry, to the Senate on Friday.

[Go here to see GOA’s alert on this topic, showing the president’s desperate attempt to get lasting gun control enacted.]

In April 2013, the United Nations General Assembly adopted the Arms Trade Treaty that aims to regulate the international trade in conventional weapons ranging from small arms to warships. The U.S. signed the treaty along with some 129 other countries but Congress has not ratified it.

The Senate would have to pass the ATT with a two-thirds majority and at least 50 Senators went on record soon after Kerry’s action by sending the White House a bipartisan letter stating they would not sign the pact, leaving it to stagnate in the State Department.

Now, with just a few days left at work doing the People’s business in Washington, Obama is making a final appeal to the lawmakers, holding that the declaration will not affect gun rights.