Urge Speaker Householder to Bring Up Constitutional Carry for a vote.

Encourage the House Speaker to Bring Up Permitless Carry for an Immediate Vote! 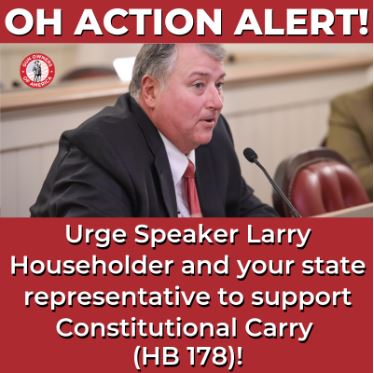 But there’s just one problem.

House Speaker Larry Householder has assigned the permitless carry bill to another committee.

As a result of this delay, press reports now indicate that no action will be taken on the bill before the legislature adjourns for its summer recess.

We sure hope that these are not legislative stall tactics that are being employed.

Which is why I need you to contact the House Speaker and urge him to bring the permitless carry bill to the House floor for an immediate vote!

Constitutional Carry is already the law in 17 other states, and there is no rational reason why it shouldn’t be the law in Ohio.

It is a simple principle which will enable every citizen to carry a concealed, self-defense gun without a government issued permission slip.

Unfortunately, law enforcement is gearing up to fight against passage of HB 178. They claim permitless carry is bad for Ohio. But they are wrong. If enacted into law, HB 178 will make Ohio a safer place.

Gun Owners of America was the first national gun organization in the country to support Constitutional Carry back in the 1990s.

Wherever and whenever we have pushed to relax concealed carry laws certain members of law enforcement have opposed these vital reforms.  And every single time, they have been proven wrong.

The 17 other Constitutional Carry states have not experienced any problems. Not only that, Ohio has allowed licensed concealed carry since 2004 and gun owners have a consistent track record of responsible behavior.

There is no evidence that repealing the requirement to obtain a government permission slip before exercising a Constitutional right will make anyone safer.

So please contact House Speaker Larry Householder ABOVE and urge him to “whip” HB 178. That is, urge him to bring the bill to the floor for a vote without any delay and let’s make Ohio a Constitutional Carry state.

Also, please be sure to contact your state representative BELOW to support Constitutional Carry.