New York-style gun control may be on its way to Nevada, if anti-gun legislators have their way. 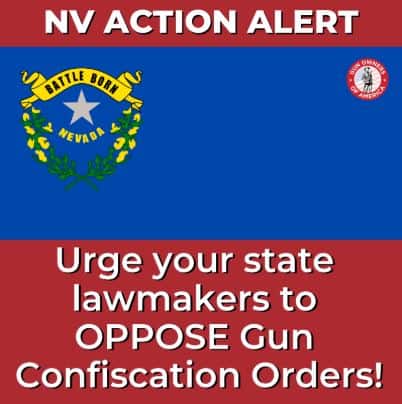 The bill, Senate Bill 120, was drafted by one of the many minions working for New York billionaire Michael Bloomberg, who is using his vast fortune to buy up states like Nevada for his anti-gun cause.

Rather, all they have to show is that you are — subjectively — “dangerous” to someone.  This can be shown because you have “exhibited conduct which a law enforcement officer determines would present a threat to the safety of the public.”

Note that the determination doesn’t have to be “reasonable” or “correct.” Also, if you acquired a firearm within the last 6 months, that also constitutes “high-risk behavior.”  (Paragraph 10 of section 9).

That’s all it takes for you to be stripped of your constitutional rights.

And it doesn’t end there.

We’ve had some experience with “emergency telephone calls” like this.  And, when only the hysterical accuser is on the line, a pliant judge will normally sign anything that is put before him.

In New Mexico, one judge issued a restraining order against Dave Letterman for supposedly sending coded messages to a New Mexico housewife, by way of her TV set.

Sure, you’ll get a hearing in 21 days — where you can try to convince the judge he made a mistake.

But no matter.  In circumstances like these, judges NEVER rule for the gun owner.

One more consideration:  You would think that even anti-gun liberals would have some problem with giving police the ability to get a rubber-stamped order to raid the home of suspected illegal immigrants, based on an allegation that they are “dangerous.”

But, if you want to turn Nevada gun ownership into some horrible nightmare, Senate Bill 120 is your vehicle.  If not, there may still be time to stop it.