On February 13, the New Mexico House passed legislation to authorize Gun Confiscation Orders (sugar-coated by the Left as “red-flag laws”) — over gun owners’ and sheriffs’ opposition. 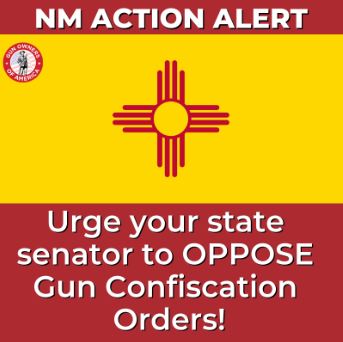 Under this Orwellian bill, police or an angry ex could convene a “secret court” to determine whether you lose a wide variety of constitutional rights under the Second, Fourth, Fifth, and Fourteenth Amendment.

Of course, the “secret court” ALWAYS decides to strip you of your guns, because, as lawyers are fond of saying:  When the accuser is the only one in the room, the judge will usually “sign a ham sandwich.”

The next thing that happens is a surprise visit from police in the middle of the night — for the purpose of ransacking your house and, if you resist, arresting or even killing you.

Think this is hyperbole?  A 60-year-old “gentle” old man was shot to death by police executing a “red flag order” in Ferndale, Maryland, within the past few months.

And, if we don’t stop this bill in the Senate, the nightmarish “knock-in the-middle-of-the-night” legislation will be coming to New Mexico as well.

Although both the House and Senate are in Democratic hands, the Senate is somewhat more balanced than the House.  Hence, if we flipped as many votes in the Senate as we flipped in the House, the bill would die.

So please get vocal and urge your state senator to OPPOSE Gun Confiscation Orders!