The gun bills were approved in April and went into effect July 1. The laws include expanded background checks, red-flag laws and laws that allow localities to impose stricter gun regulations than state and federal laws. 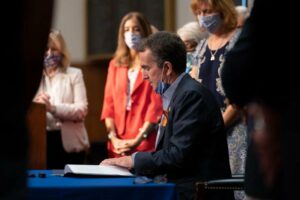 “Today would not have been possible without many Virginians saying, ‘Enough is enough,’ ” Northam said. “I want to thank all who advocated for commonsense gun safety laws, as well as all of the legislators who listened to them. These laws will save lives.”…

Northam said these laws help prevent gun crime without infringing on the Second Amendment of the U.S. Constitution. He said legal gun owners have nothing to worry about.

Despite the governor’s assurance, the legislation received staunch opposition from the Republican minority and gun-rights advocates who believe differently.

“Gov. Northam is completely out of touch with the people of Virginia,” Erich Pratt, the senior vice president of Gun Owners of America, told The Center Square. “While many cities across the country are reporting increases in murders, police have been ordered to stand down in the face of violent rioters. In response, Americans, including many in Virginia, are buying guns at record rates. But Northam and his fellow cronies in the Democrat Party could care less about what Virginians truly need. They only care about their disarmament agenda and are ramping up the infringements on people’s God-given right of self-defense.”