Last year was a very busy year for the firearms industry — and if the historical patterns repeat, 2021 will be as well.

Gun, ammunition and firearms accessory sales have been hitting record high levels. Dealers are unable to keep inventory in stock for more than a few hours and gun dealers and buyers alike are frustrated with the inefficient manner in which the NH State Police (NHSP) “gun line” processes requests for checks on handgun buyers.

To be sure, GOA has heard from dozens of gun buyers and dealers complaining about the handgun buying process. At the same time, they have all said that when a gun dealer contacts the FBI NICS operations center for the sale of a rifle or shotgun, most checks are completed in less than five minutes. 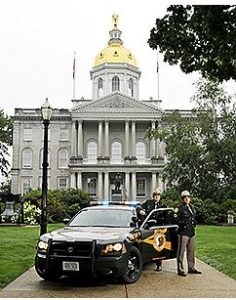 GOA has strongly opposed background checks throughout our entire 45 year history.  They don’t work, as evidenced by recent high profile murders where the murderer passed a background check because the criminal did not have a prior criminal record — including the now-infamous Las Vegas murderer and the criminal who shot former Member of Congress Gabriel Giffords.

The Sandy Hook murderer killed his own mother and stole her firearms before he set about to harm innocent educators and children.  His mother passed a background check and secured her firearms but that didn’t stop her criminal son.

So even while criminals still manage to get their hands on firearms, GOA has received credible reports that honest Americans are being improperly denied their right to own a gun because of the seriously flawed NICS system.  And the delay prone New Hampshire system is just the latest outrage.

The History of Background Checks in New Hampshire

Those with long memories may recall that back in 1994, HB 438 was enacted into law so that handgun buyers could be relieved of the seven day “Brady Wait.”  HB 438 even exempted holders of a New Hampshire pistol and revolver license from the check.  The law included a “sunset clause” that automatically repealed the law on the date a national system became operational.  That date was November 30, 1998.

Instead of adhering to the “sunset clause,” the state police continued to conduct checks on handgun buyers.  The legislature took notice of this and on November 3, 1999, HB 537 was enacted and took effect immediately.

HB 537 replaced the prior law and gave the Department of Safety permission to conduct these checks.  But it’s important to note that HB 537 neither required that these checks be conducted, nor had many of the protections for gun buyers that were contained in HB 438.

Mr. Jim McLoud, the owner of Shooters Outpost in Hooksett, NH, recently contacted me to discuss the lengthy delays by the New Hampshire “gun line” and the problems they are causing for his business.

Mr. McLoud told me that he has over $100,000 in handguns that have been sold but cannot be handed over to the buyers because of delays in the “instant check” — delays that are averaging about a hundred transactions per week and taking a few months to be completed.

We’ve also heard from Mr. Tony Hook who runs RTD Mfg. in Goffstown.  Mr. Hook told me  when he contacts the “gun line” one of two things happens.  Either he is told “we will call you back,” and then at some later time, the dealer is asked for the customer’s information (name, date of birth, etc.)

Or NHSP takes the buyers information on the initial call and just says “we will call you back.”  When gun sales are not hitting record high volumes, the call back comes anywhere from 15 minutes to a few hours.

However, during busy times, the hours turn into days and, in the wake of the COVID-19 pandemic, the days are turning into weeks and sometimes months.  This is far from instant and completely unacceptable — especially when compared to the FBI NICS system which typically gives a much quicker response than does the NHSP.

Both Mr. McLoud and Mr. Hook told me that in some cases, checks for handgun sales by the NHSP have run as long as three months.

Handgun buyers being subjected to long waits by NHSP is not a new problem. It is a twenty year old problem that has been worsened by the increase in gun sales due to widespread riots, looting and COVID-19.

Those who have been involved in this issue for most of the past two and a half decades have told me that the New Hampshire “gun line” has always been operated in this grossly inefficient manner — especially when compared to the FBI NICS system which, again, typically gives a much quicker response.

Mr. Hook told me about a delayed transaction — where after the third business day, he released a gun to the customer (as the law allows). Then, after two more days had passed, NHSP called him to let him know that the transaction was denied.

Next, they asked Mr. Hook to attempt to retrieve the firearm from the prohibited possessor.  Tony told me that this was strictly voluntary, even though the NHSP was unable to complete their assigned task in a reasonable period of time.  After issuing a delayed denial, they enlisted the help of a small business owner to do their job. Now Mr. Hook has a used gun on his hands.

GOA has opposed NICS since its inception. For starters, we vehemently disagree with the premise of the system — that law-abiding citizens should be forced to prove their innocence to the government before exercising their rights. This essentially puts bureaucrats in the position of having to check millions of law-abiding people to find just a few criminals.

Now gun buyers are witnessing, first hand, that which we predicted would happen. That is, we are seeing that people can’t obtain a self-defense firearm in a timely fashion.

The time is right to use the form above to contact Governor Sununu and let him know that the law allows, but does not require, the state police to conduct these checks.

Despite all of these problems, some pseudo gun activists are claiming that the New Hampshire “gun line” can be “fixed.”  We are even hearing that legislation to repair it may be forthcoming.

If it was possible to “fix” the long wait times, it would have been fixed years ago — long before the problems became this bad. Disbanding it is the only solution — and we are hearing that legislation to do that is forthcoming, as well.

Please use the form above and urge the governor to do this.  If that happens, by default, all checks will be conducted by the FBI — and the vast majority of transactions will likely be approved in fewer than five minutes.

Gun owners will face fewer delays if they only have to clear one set of hurdles (at the federal level), as opposed to forcing gun buyers to submit to state-mandated background checks, which then adds another level of bureaucratic delays.