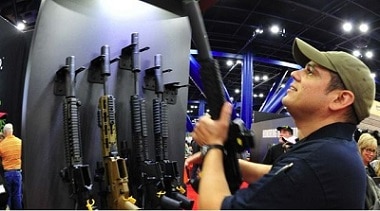 Gun Owners of America is rallying behind Republican-sponsored legislation that would not only remove suppressors from the purview of the National Firearms Act (1934), but would also remove the background check requirement from their sale.

With Pratt’s position understood, it only makes sense that he–and GOA more largely–would oppose requiring background checks for devices that are not firearms. Therefore, they are rallying behind the SHUSH Act.

Gun Owners of America applauds Republican Senators Mike Lee of Utah and Mike Crapo of Idaho along with Republican Congressman Steve King of Iowa for introducing the “Silencers Helping Us Save Hearing Act” (SHUSH) Act. The SHUSH Act would not only remove suppressors (a firearm muffling device) from federal regulations, but also treat suppressors as any other firearm accessory – free from the infringing background check process. GOA believes this Act will not only benefit hunters and sport shooters, but also take much needed steps for gun owners to restore the Second Amendment.