Would ‘good guys with guns’ have stopped the Sydney hostage siege?

Would ‘good guys with guns’ have stopped the Sydney hostage siege?

Australia’s strict gun laws are at the center of Monday’s deadly hostage siege in Sydney, at least in the minds of American gun-rights advocates.

The suspected gunman, who was holding people hostage inside a downtown Sydney cafe, was reportedly killed during a police raid early Tuesday morning, local time, following a 16-hour standoff. Two hostages died during the confrontation with police.

It’s unclear how the suspected gunman, identified by police as Man Haron Monis, obtained his shotgun, given his extensive criminal background and Australia’s tight gun laws. But some supporters of looser gun laws in 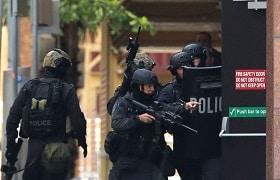 the U.S. suggested that if Australians were legally permitted to carry firearms, the hostage situation could have been averted altogether.

“I do think it’s a wakeup call for them,” Erich Pratt, communications director of Gun Owners of America, said in an interview. “I do think it’s certainly of note that the shooting was halted when good guys with guns showed up.”

“Preventing people from possessing firearms or carrying firearms isn’t going to stop bad guys, like this guy in Sydney, from breaking the law,” he added. “They’re going to break the law anyway. The question is are they going to allow the first responders — the potential victims — to protect themselves and diffuse the situation?” …