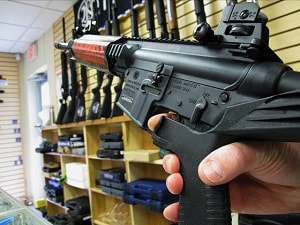 “NICS background checks are a bad idea for anyone claiming to cherish constitutional rights. The whole idea of the government screening citizens before exercising a constitutional right goes against the values America’s Founders tried to protect.” – Jordan Stein

Republicans seem finally willing to restore carry rights by acting on concealed carry reciprocity, and this is good news for law-abiding Americans.

Sadly, many of those same Republicans are joining with Democrats to bring up gun control in the form of supposed “NICS Fix” bills, H.R. 4434 and S. 2135.

This is not good news because anything short of repealing the National Instant Check System (NICS) is the wrong move, both practically and in principle.

Most agree that NICS is a flawed system, but what is overlooked is that it is actually used to deny gun rights to honest citizens.

Researcher Dr. John Lott has shown that, according to Department of Justice data, 95 percent of initial denials are “false positives.” This can happen when an honest citizen attempts to purchase a gun—his or her name can be erroneously matched with a criminal’s name, and the citizen is then denied a gun.

And this is not to mention the over a quarter of a million military veterans who have been denied Second Amendment rights simply because a fiduciary handles their finances.

Even if NICS was a perfect system, it still does not prevent bad guys from getting guns by other means.

If a bad guy is denied a firearm, he or she is not physically prevented from getting a gun. Nothing is stopping someone with malicious intentions from stealing firearms, as infamously shown in the case of the Sandy Hook shooter; or from making their own guns, as in the case of the Rancho Tehama shooter. (It should be noted that both of these shootings took place in gun-controlled states, which have far stricter gun control measures than just the NICS system itself, yet these evildoers were still able to tragically take lives.)

The attempts to “fix NICS” will at best be redundant, and at worse make the system more problematic. Consider that the descriptions of H.R. 4434 and S. 2135 assert the bills are “to enforce current law regarding the National Instant Criminal Background Check System.” If more names are added to the NICS records, then the number of false positive denials will actually rise.

For example, consider that 257,000 military veterans had their gun rights denied when their names were added into NICS because someone else handles their finances. Other decent citizens—such as medical marijuana users, and even those who have unpaid speeding tickets—are also at risk of having their rights denied under H.R. 4434 and S. 2135.

NICS is redundant in the first place. Ever since America’s founding, there has been a system for keeping bad guys from getting guns—due process. The Fifth (and later Fourteenth) Amendments ensure that the government can take away rights through a fair judicial procedure, but there’s no constitutional room for a prior restraint on protected rights.

Supporters of this legislation note that the bill contains language which purports to require the Attorney General to remove erroneously submitted names within 60 days.  Of course, the Brady Law itself ALREADY requires the prompt correction of erroneous records—but this provision has been deliberately ignored for over two decades.

Given that there are no sanctions in the bill which can be applied against anyone in the Justice Department for non-compliance, this supposed “protection” is not worth the paper it is written on.

Imagine if one had to undergo background checks before writing a blog or going to church. Or, what if prior government screening was required before news outlets were allowed to publish their stories? Even the political left would not tolerate such infringements. And the right to keep and bear arms, which is protected by the Second Amendment, is absolutely no different.

Perhaps something should be done about NICS. It should be sent to the trash bin of history, along with every other prior restraint on the right to keep and bear arms.

Jordan Stein is the Director of Communications for Gun Owners of America (GOA) and guest columnist for “Down Range with AWR Hawkins.” Follow him on Twitter: @jordankstein