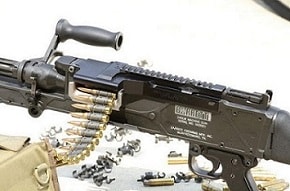 On November 2, Gun Owners of America (and its foundation) filed in the U.S. Court of Appeals for the Fifth Circuit an amicus brief in support of a challenge to the federal machine gun ban, ironically passed as part of the 1986 Firearm Owners Protection Act.

Finally, the Gun Owners’ brief ridicules those who say that fully-automatic machine guns are far too terrifying and powerful for ordinary people to own, and we take the ATF to task for its bait-n-switch tactics.

Check out the brief here.

And you can give a contribution to help support this case here.

Under the Gun Control Act (“GCA”), “persons” are generally prohibited from possessing machine guns. A “person” is defined to include entities such as a corporation and partnership — but the definition does not include a trust. Moreover, in 2014, ATF took the position that “unincorporated trusts are not ‘persons’ under the GCA.”

Based on that understanding that trusts are not persons, the Jay Aubrey Isaac Hollis Revocable Living Trust applied to the ATF for approval to manufacture and register an M-16 machine gun. When ATF eventually revoked the application, the Trust sued, but the U.S. District Court for the Northern District of Texas dismissed the case.

The GOA brief argued that not only did Heller and Miller not foreclose the argument, but rather they support it. Indeed, Heller explicitly stated that “the Second Amendment extends, prima facie, to all instruments that constitute bearable arms.” And Miller stated that weapons which are “part of the ordinary military equipment” (like the M-16) are the sorts protected by the Second Amendment.

The GOA brief also critiqued the district court’s absurd use of founding era militia requirements to support its holding. The district court seemed to believe such statutes established maximum limits on the types of weapons people “could” have. On the contrary, those statutes established minimum requirements on the sorts of weapons people “would be required” to have.

As the GOA brief argued, the idea is laughable that, if someone showed up at Lexington and Concord with an M-16, his commanders would have turned him away, saying “Take it home, that’s far too effective a weapon to use against the Redcoats.”

The GOA brief ridiculed those who say that fully-automatic machine guns are far too terrifying and powerful for ordinary people to own. Indeed, over the course of U.S. history, developments like the semi-automatic M-1 Garand, the lever action Henry Arms repeating rifle — and even the firearm cartridge itself — all were vast improvements in rate of fire and lethality over their predecessors. But you would probably not hear the argument today that the lever-action rifle is too terrifying to allow in civilian hands because of how easy it is to shoot multiple people quickly without reloading.

Next, the GOA brief critiqued ATF’s bait-and-switch tactics when it comes to trusts and federal gun law. Under federal law, transfers of NFA weapons are exempt from the NICS background check. Indeed, under federal law, it appears that trusts are not subject to the NICS system at all, since they are not persons.

However, ATF claims that in NFA transfers to trusts, a “responsible person” must be subject to a NICS check – in direct contravention of the statute. And, our brief argued, if as ATF claims, a trust is not a person, then a trust can possess a machine gun, since only “persons” are prohibited from possessing them. In short, our brief argued that ATF cannot have its cake and eat it to, using conflicting definitions and “interpretations” whenever it suits them.

Finally, the GOA brief called upon the U.S. Court of Appeals for the Fifth Circuit to continue its tradition of standing up for gun rights in spite of overwhelming consensus by other circuits to do the opposite. Indeed, many years prior to Heller, the Fifth Circuit stood alone among the circuits in holding that the Second Amendment protected an individual right.

Indeed, when we get down to brass tacks, the Second Amendment is not about hunting, or target shooting, or even just self-defense against a neighbor — but about self-defense against the state, to the end that a “free State” be preserved. It may be, as the Supreme Court noted, that “no amount of small arms could be useful against modern-day bombers and tanks.” They can, however, serve as a bulwark against tyranny.