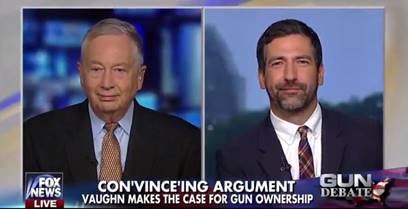 What follows it a partial transcript for the June 2 debate.

Kimberly Guilfoyle of Fox & Friends:
Here to debate it all.  Larry Pratt is the Executive Director for Gun Owners of America.  And Mark Glaze is the former Executive Director of Everytown for Gun Safety.  Gentlemen, thanks for joining us this morning.  I’m going to start with this.  Gun ownership in America: 57% [of] people believe it protects people from becoming crime victims, while 38% say it puts people’s safety at risk.  What say you, Larry?

Larry Pratt of Gun Owners of America:
That’s something that represents a growing trend in public opinion in our country. When I began working with Gun Owners of America, decades ago, a survey would not have shown that kind of result. People are increasingly of the opinion that they’re on their own for a minimum [of] five minutes before the police are able to respond. What are they going to do in that five minutes? You can be dead several times over if you can’t protect your life, and people are opting to buy guns — especially women….

Mark Glaze of Everytown:
There is nothing wrong with owning a gun in your home for self-defense. That’s what the Supreme Court has said.  The problem is that in something like 40% of the country you don’t have to get a background check if you just go around a licensed dealership and buy online, on somewhere like Armslist.com. That’s the way that many of the crimes that happen with guns in this country happen. They avoid the background check and get a gun even if they’re a felon or domestic violence perpetrator. And that’s that. There’s no questions asked.

Kimberly Guilfoyle:
We’re talking about a few instances there. Larry, I’ll give you the final word.

Larry Pratt:
I think Vaughn’s point really needs to be emphasized. The right to keep and bear arms is enshrined in our Constitution in order to protect the people’s right to protect themselves against tyrannical government. And there’s actually a Hollywood movie on point.  It’s called the Battle of Athens back in 1946. Veterans returning from the war realized that an election had just been stolen before their very eyes. They came into town that night with their guns, had a brief gun fight with the cops, and got the ballot boxes released. And the Reform slate won after all.

Kimberly Guilfoyle:
There you go.  Alright, gentlemen, we’re going to leave it right there.
Prev. Article
Next Article

Take the Next Step to Strengthening Second Amendment in Alabama