There have been positive developments in the fight to block the enforcement of federal gun control around the country.

More than a dozen states have introduced bills this year to put federal officials on notice that they will get no assistance in helping federal agents carry out unconstitutional actions.

Montana became the first of these to send a nullification bill to the Governor’s desk.  Other states could soon follow. 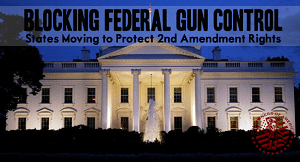 And in 2010, Wyoming went even further than non-cooperation.  The Cowboy State enacted a law threatening a year in jail for any federal officer who interferes with the legally protected manufacture of a Wyoming firearm that has no federally-mandated serial number.

Non-cooperation is not a guarantee that the federal government will comply with the Second Amendment’s “shall not be infringed” mandate.  But it makes it less likely that the feds would goose-step into those jurisdictions.

The federal government’s attack on the Davidians near Waco in 1993 had the cooperation of local law enforcement officials and, in the end, 86 people died — including four agents of the Bureau of Alcohol, Tobacco, Firearms and Explosives.  However, the siege of Cliven Bundy on his ranch outside Las Vegas last year resulted in no deaths.

The chief difference between Waco and the Bundy Ranch is that armed Americans from all over the country came to the Nevada ranch with the slogan “no more free Wacos” on their lips.  There were no armed defenders that came to the aid of the Davidians.

What Is the Proper Response to Tyranny?

What the states are doing today in blocking gun control and resisting tyranny has strong historical roots.

Pastor Matt Trewhella has written about the biblical doctrine of resistance to tyranny — and how public officials can defy lawlessness committed by kings, governors or other public officials.  Trewhella’s treatise is presented in his book The Doctrine of the Lesser Magistrates.

Trewhella shows that unlimited obedience to unjust laws or edicts issued by government officials results in elevating them to the position that is occupied solely by God.  Any law or command that violates what has been commanded or prohibited by God requires our resistance if we are to be faithful to God.  And this mandate applies to lesser magistrates as well.

Trewhella argues from Scripture and from history that the so-called “lesser magistrates,” if they are faithful to God, are required to only enforce just laws.  Conversely, they are to refuse to enforce unjust laws.  Interposition is not subjective.

Likewise, he deals with passages like the Sermon on the Mount where Jesus tells listeners to “turn the other cheek.”  But rather than teaching pacifism, the author says that Jesus is repudiating personal vengeance.  He is not saying we cannot defend ourselves and others.

Bottom line:  Trewhella says that “God is not a pacifist [and] Jesus is not a pacifist.”  As mentioned above, the author gives several proofs from history and the Bible to show the importance of self-defense, and the need for interposition by lower-level government officials.

The greatest statement on the doctrine of nullification by lesser magistrates was made by the Roman emperor Trajan who, while appointing a subordinate authority, handed him a sword and instructed him, saying: “Use this sword against my enemies if I give righteous commands; but if I give unrighteous commands, use it against me.”

Larry Pratt is the Executive Director of Gun Owners of America, a gun lobby representing more than one million members and activists.

House Guest To The Rescue: Shoots And Kills Home Intruder, Sends Other Three Running For Their Lives