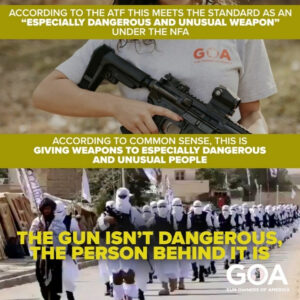 The next step would be if and when the ATF’s gun control goes into effect, because then GOA and the Gun Owners Foundation will file our lawsuit!

But a strong showing by gun owners in opposition to this Proposed Rule will send a clear message to future judges who will take up our case.

So it is critical that you take action today—before it’s too late!

We are truly watching an incredible double standard on the part of Joe Biden.

While the Biden administration has handed over 600,000 U.S. made firearms to the Taliban, where is the ATF focusing its efforts? On disarming the American people.

But you do have a chance to fight back against the ATF’s proposed ban on 40,000,000 pistols—before midnight on September 8!

GOA examined ATF’s proposed pistol ban, and this is what we found:

1) The ATF’s Proposed Rule constitutes a blanket ban on the use of stabilizing braces.

2) Both the December 2020 attempted ban by the ATF, and this ban, both conflict with prior ATF guidance. The ban would overrule all previous classification letters issued by ATF.

4) The ban glosses over ATF’s arbitrary creation of millions of new felons—which would be comprised of you, the law-abiding gun owner.

You just cannot make this stuff up!

I hope you can understand why it’s so critical that you and every gun owner you know TAKE ACTION and submit a comment to ATF, demanding the proposed rule be withdrawn!

Gun owner to gun owner, if you haven’t taken action yet, I implore you to please do so if you haven’t already. We must all stand together, or this rule will ban up to 40 million firearms.

In the Proposed Rule, ATF alleges brace manufacturers have lied about sales, and that only about 3 million have been sold.

But the Congressional Research Service—comprised of nonpartisan government bureaucrats—estimates up to 40 million braces could be affected.

The Proposed Rule’s estimates of its effects on gun owners, the firearms industry, and the economy is flawed.

And we know why they want to do that—it’s to undermine Americans’ ability to exercise their Second Amendment-protected rights!

Now, Gun Owners of America is preparing to submit our own comments to ATF explaining each of our concerns in depth.

Right now, we need you to use our model comment tool to echo all of our concerns to ATF.

The more gun owners make these powerful arguments during the notice and comment period, the more obvious the administrative record will be that ATF’s rule is arbitrary and capricious when GOA and Gun Owners Foundation sue to stop the rule in court.

We can win this one and we can keep winning in the future, but you need to get involved and TAKE ACTION today.