GOA is now being attacked because we want to ABOLISH the ATF.

We stand by our mission 100%. The ATF’s days of waging war on YOUR God-given rights MUST come to an end.

Here’s our plan to make it happen: 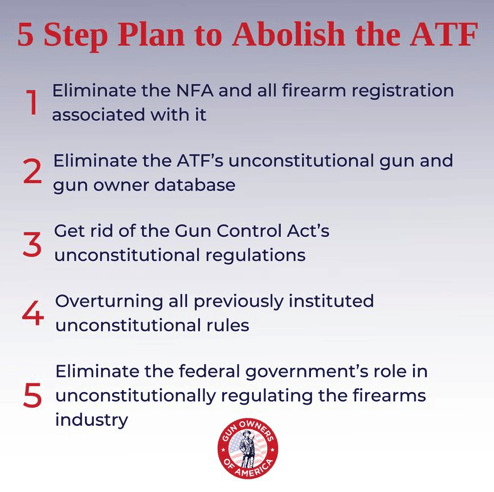 The statement below comes from an anti-gunner, who testified during the recent House hearings on so-called “assault weapons.”

Most recently, the ATF showed up at a gun owner’s home in Delaware demanding information on his firearms, apparently without a warrant.

Of course, how could we ever forget what happened during the Waco massacre where 76 Branch Davidian members DIED during the ATF’s raid?

The ATF simply cannot be “reformed.”

And while the ATF must certainly be defunded, ending their stream of taxpayer funds is not enough to completely end its power over your God-given rights.

The ONLY acceptable path forward is for the ATF to be ABOLISHED.

At a fundamental level, the ATF simply should not exist. Its very purpose is to infringe upon your constitutionally protected right to keep and bear arms.

And as we’ve witnessed over the years, not only does the ATF regulate your right to defend yourself, but it does so in abusive, tyrannical, and, sometimes even, deadly ways.

GOA will use every tool at our disposal to dismantle the ATF. That includes, but is not limited to:

🎯 Electing TRUE pro-gun allies to Congress who will strip the ATF of its powers, defund it, and ultimately ABOLISH it

But to carry out our mission to ABOLISH the ATF, GOA will need YOUR sustained support.

So please, make a contribution to GOA’s Abolish the ATF Fund to help us carry out our mission to abolish the ATF once and for all.