Take Action to Allow for Carry on Federal Property!

During the 111th Congress and under President Barack Obama, GOA was successful in working with Senator Coburn to add a pro-gun “national parks” amendment, S. Amdt. 1068, to the Credit Card Act of 2009. 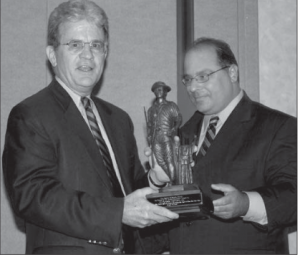 GOA’s John Velleco (right) presents a Friend of the 2A award to Senator Tom Coburn in 2009.

The amendment recognized your right to defend yourself and your family by carrying a gun in national parks — to the same extent that you can in the state where the park is located.

Contrary to anti-gun predictions, Yellowstone did not become a “Boot Hill” burial ground because law-abiding Americans could defend themselves.

However, Barack Obama, still licking his wounds, refused to extend the amendment’s protections to Corps of Engineer lands, as we — the authors of the amendment — intended.

For the last nine years, this dichotomy has persisted.  National Park Service concedes that our amendment forces them to recognize the Second Amendment.  The Army Corps of Engineers has not.

On April 13, President Donald Trump’s Army Corps of Engineers published a request for comment on its proposed regulation to bring its land in sync with the federal park provisions of GOA’s amendment.

Thus, you would be able to possess and use firearms on these lands to the same extent as the state in which the land is located.

Written comments must be submitted on or before June 12, 2020.

In many parts of the country, the Army Corps of Engineers has jurisdiction over huge parcels of land — managing over 400 lake and river projects in 43 states.  It makes no sense that your rights to protect yourself differs from one part of a state to another merely because you cross an arbitrary line.  Furthermore, the logistics of such a rule have been virtually impossible to comply with.

States and other federal agencies have, since 2009, changed their laws on the assumption that all federal lands have adopted rules similar to those in national parks.

For this reason, we are urging you to write the Army Corps of Engineers, commending them for their proposed change.

Why Are Democrats Disarming Citizens and Setting Prisoners Free?